Politicians and business people pay tribute to Queen Elizabeth II, who died on Thursday afternoon, and hail the start of the reign of King Charles III.

“She quietly and conscientiously led us through the longest reign of any English ruler, consolidating the peace brought about by her parents following the Abdication crisis of 1935-6,” he said. “This Queen’s reign witnessed a period of immense socio-cultural and economic change during which time the Commonwealth’s shape and membership altered considerably.”

He added, “There is overwhelming sadness at the loss of our remarkable, uniquely conscientious, human, humorous and loveable Monarch, whose contribution to the stability and sense of history of this country cannot probably yet be evaluated. Her successor, King Charles III, is a different but true successor who will stress the continuity and modern relevance of the Monarchy in its triple roles as Head of State, of the Anglican Church and of the Nation.”

HM Lord-Lieutenant of the East Riding of Yorkshire, James Dick OBE, said the Queen had provided “essential continuity” through decades of change, from the post-war years to the 21st century.

“Her Majesty demonstrated extraordinary dedication and commitment to duty throughout her reign, both for her country and the Commonwealth, and did so with a graceful strength and admirable determination.”

He added, “This is a period of public grief, when people who do not know each other come together to mourn a national figure who, has been consistent throughout our lives and for whom we have collective affection despite not knowing her personally.”

West Yorkshire Mayor Tracy Brabin said, “On behalf of the people of West Yorkshire, I would like to pay our respects to Her Majesty Queen Elizabeth II and send our deepest condolences to the Royal Family.

“The sad loss of our longest-serving monarch will be felt right around the world, by people from all backgrounds and walks of life. As we come together to mourn, we should keep in our hearts the values that she embodied throughout her life – of courage, empathy, and compassion.

The Lord Mayor of Leeds, Coun Robert W Gettings MBE JP, said, “She gracefully led our country, and the Commonwealth, through all manner of challenges throughout her 70 years with dignity and dedication, the likes of which we may never see again.

“I know from her last visit to Leeds when the crowds lined Briggate to see her on her visit to the newly refurbished City Varieties Music Hall how much people respected and admired her, and so on behalf of the people of Leeds I have expressed our formal condolences in a letter to the new Sovereign’s Private Secretary to be passed to the new Sovereign. Flags on civic buildings have been lowered to half-mast in tribute.

The Lord Mayor of Sheffield, Sioned-Mair Richards, said, “On behalf of the City Council and the people of Sheffield I want to express our great sadness at the news of the death of Her Majesty, Queen Elizabeth today. Our sincere condolences go to members of the Royal Family at this time of sadness and personal loss.

“Her reign will be acknowledged in history as one of the greatest of all monarchs and, through years of major challenges and difficulties for the country, she retained a true sense of dignity throughout.”

East Riding council chairman Coun John Whittle, leader of the council Coun Jonathan Owen and the council’s chief executive, Caroline Lacey, said in a joint statement, “We are all deeply saddened to learn of the death of Her Majesty Queen Elizabeth II and send our heartfelt condolences and sympathy to her family. They are all in our thoughts and prayers at this extremely sad time.

“She dedicated her life to serving the people of the United Kingdom and the Commonwealth and has been a beacon of hope, stability and unity and overseen many changes during her reign as monarch with unwavering grace and poise.

“As the longest serving monarch she has been an ever-present in most people’s lives and it’s unlikely we will ever witness a reign as long and as glorious again.”

He said, “In common with the vast majority of people in the country, today I have a feeing of sadness and emptiness following the untimely death of our  Queen. I was privileged to meet her on a number of occasions and retain a memory of each particularly her warmth, her breadth of knowledge and sense of fun.

“It is almost impossible to believe after 70 years of dedicated service to the country that in her early life she wasn’t destined to be Queen. Yet having found herself thrust into the role of Monarch for 70 years she has remained true to her promise to serve the people of this country and the people of the Commonwealth.

“I feel a hole has opened up in my life, as I’m  sure many do. It will take  time to adjust and we will of never forget the stability she brought. King Charles III becomes Monarch at a time of domestic and global challenges. I’m sure the  wisdom he will have gained from the late Queen will have prepared him well. God Save the King.”

Ilkley-based investment and business development consultant David Shaw MBE met both the Queen and Prince Philip several times, both through his work as National Commissioner of Scouts and as an adviser to the Prince Philip Trust Fund and Duke of Edinburgh Award Scheme. 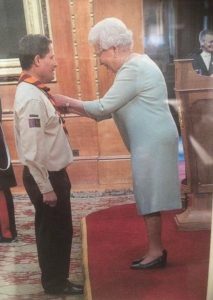 He praised the Queen’s dedication, and said she set an example of leadership many tried to emulate but none could match. “She was quite a shy person, which perhaps people don’t appreciate, but on her own territory, her own palaces or houses, incredibly impressive. Her knowledge and attention to detail were second to none.”

Shaw was living in Windsor at the time he was invested with his MBE, and had seen the Queen regularly through his work with the Scouts. “She had quite a sense of humour. She said to me, ‘Well, you haven’t had to come far, David.’ She laughed, and you can see that on the picture of my investiture. The Queen, and Princess Anne and Prince Philip, they had an incredible memory for that personal information, which they knew was incredibly important.”

Mr Shaw, who also chairs Keighley Pride and Ilkley Pride & Diversity, added: “The importance to her of her country and the Commonwealth came over very strongly, and the Duke was the same. They were obviously passionate about the people of the UK, and anything Britain did in its manufacturing and its traditions.

“Whether you’re a royalist or not, you have got to admire her attention to detail of events, and the way she was very particular about continuing the traditions which we have uniquely in this country. We are the envy of the world and long may that continue.

“When you worked with them, and were involved in events, you realise how much time and effort is put in, and how much the Queen checked things. It was amazing. She would always correct the odd thing, or comment. It always had to be of the highest standard.

“I found the Queen and Prince Philip both very amusing. They would make incredibly good Northerners. They’d say it as it is, and they liked people to say it as it is to them. They both loved a bit of banter, and the truth, and reasonable comments and discussion.”

Ripon paint and coating specialist T&R Williamson is one of less than 800 firms worldwide to hold a royal warrant.

Group chief executive Abubaker Sheibani said everyone at the firm was deeply saddened to learn of the Queen’s death. “It was the proudest moment in T&R Williamson’s history, which dates almost 250 years, to be presented with the Royal Warrant in 2011 for supplying the Royal Mews and Royal Carriages. To commemorate her jubilee this summer, we were thrilled to be invited to turn one of the UK’s most famous steam locomotives, the Taw Valley, into platinum purple to mark the occasion.

“Extending our royal connection in the way was a fitting and truly memorable event to commemorate Her Majesty becoming the first British Monarch in history to reign for 70 years.

“The world will never see the like of her again.”

‘Trailblazer’ devolution deals to be relit

Chancellor focuses on stability with £55bn plan to rebuild public...

Autumn Statement 2022: At a glance