The development team at Airport City Manchester confirmed that construction has started on two new major hotel developments that will deliver a total of 542 new hotel beds and create in the region of 350 jobs.

Forming part of Airport City Manchester’s new hotel district, work to build a 280-bed Holiday Inn and a 262-bed Ibis Budget will be undertaken by Beijing Construction Engineering Group International (BCEGI), which has been appointed as the main contractor on the £45m project.

In addition, a new planning application has been submitted to Manchester City Council for a nine-storey, 412-bedroom hotel and restaurant, operated under the TRIBE brand, which is part of the Accor Group and whose other brands include Mercure, Sofitel and Novotel.

The developments are all located next to Manchester Airport and are at the heart of Airport City Manchester.

Adjacent to the multimodal ground transport interchange, the hotels will become part of a wider hotel district featuring a cluster of nine new properties and providing more than 2,400 new hotel rooms.

Dongwen Yu, lead director, BCEGI, said: “We are delighted to be appointed as the contractor to deliver these two new hotels at Airport City Manchester.

“Alongside The Hut Group and the new pedestrian bridge construction, both hotels reinforce the fact momentum at Airport City Manchester is building and it’s fantastic to be involved as both JV partner and the main contractor.”

“Responding primarily to the airport’s sustained growth in passenger numbers and its £1bn Transformation Programme to facilitate further growth and an enhanced customer experience, the new hotels will provide much-needed accommodation to meet growing demand.

“We’re also delighted with the submission of a further planning application for a TRIBE hotel, which again demonstrates the calibre of operator interest in Airport City Manchester as our vision continues to progress into a reality.

“These hotels, under globally-recognised leading brands, will bring a range of additional facilities and amenities to the airport campus, such as meeting space and new a food and drink offer, as well as providing employment opportunities for local people both during the construction stage and once operational.”

Room types, including standard, twin, family, executive and accessible, will be offered across six floors, while the southern corner of the sixth floor has been tailored to create a terrace for guests, overlooking the airfield. 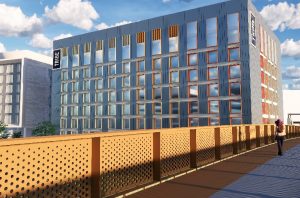 Meanwhile, the seventh floor will feature a canopied terrace and crew lounge which will look north over Airport City Manchester towards Manchester’s city centre.

It will also feature a new full-service restaurant located on the ground floor, which has been designed to attract guests from both hotels.

The start of construction on these hotels is the latest stage of progress at the landmark £1bn Airport City Manchester development – with construction of a new £6m pedestrian and cycle bridge over the M56 motorway spur road having commenced in October 2019.

It also follows plans to develop one million sq ft of office space for The Hut Group at Airport City Manchester.