To mark 25 years of Manchester Arena, the venue has today unveiled an early stage vision for its redevelopment, marking a year of celebration for the people, communities and businesses that have made it one of the world’s most successful venues.

ASM Global, operators of the iconic venue, has provided a first look at the vision for its future.

Initial artist impressions created by global design practice HOK are the focus of a new video which outlines the operator’s intentions for its state-of-the-art redevelopment.

The plans represent a significant investment into the iconic venue and have been created to ensure the Arena remains at the heart of the city for the next 25 years and beyond.

A new aesthetic for the Arena’s façade pays homage to Manchester’s symbolic worker bee, while an external redesign reimagines the customer arrival experience and flow between the venue and Manchester Victoria transport links.

New concourse levels would be introduced to enable better circulation throughout the venue, provide additional retail space and introduce a dedicated level for reimagined VIP boxes and lounges.

A dramatic redesign of the main arena would significantly increase standing capacity and provide new food and drink experiences on the event floor. It would take overall capacity to more than 24,000, making it the largest indoor arena in Europe.

John Sharkey, executive vice president European operations for ASM Global, said: “These plans have been made public earlier than intended, as we are still in the process of consulting with Manchester City Council, our neighbours and landlord on the design – their input and involvement in this journey will be crucial. 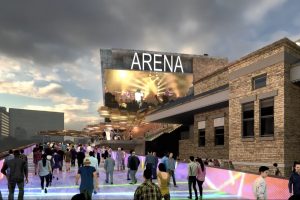 “In particular, we’re working to ensure our final proposals fit with the council’s wider infrastructure planning. We are also in dialogue with the families of the May 2017 terrorist attack around a fitting memorial for the City Room.”

A recent independent study conducted by advisory firm Grant Thornton revealed that visitors to Manchester Arena spent an estimated £114m in the city centre in 2018, demonstrating its crucial role in the city’s economy.

John Sharkey added: “Our ambition throughout this process is to embed sustainability into every corner of the Arena, with the goal of becoming one of the lowest carbon venues in Europe.”

The visuals represent the first phase of redevelopment plans and the venue will be inviting people across the city to have their say on Manchester Arena’s exciting future in the coming months.