The Ivy Restaurant has been granted permission to open in Liverpool.

The famous restaurant chain has been given planning permission by Liverpool City Council to alter 7 Water Street from its current use as serviced office space to a restaurant and dining business.

Permission was given by the council’s planning committee where it received a change of use application to transform the space from Troia (UK) Restaurants, the business behind The Ivy brand.

The Ivy operates a string of locations throughout London and around the country, including one in Manchester which opened in November 2018, in the business district of Spinningfields.

It was forced to close temporarily, shortly after opening, following a blaze which broke out on open roof-top terracing in January 2019, believed to have been caused by a patio heater.

Built in 1896, Grade II-listed 7 Water Street was purpose built as the head office of the Bank of Liverpool.

It has also served as offices for various banks and insurance companies. 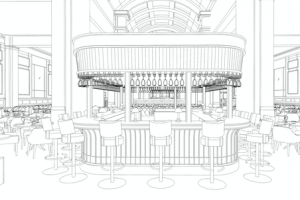 Plans for the site included with the submission

Liverpool council has agreed for the restaurant chain to carry out internal work on the ground and basement floor, and some external work.

The address, currently known as Il Palazzo, is notable for its distinctive bronze doors decorated with two lion’s heads.

Logistics scheme on former colliery site could create many hundreds...