Manchester-based events production company, Engine No.4, has spearheaded a series of firsts for the live entertainment industry, launching, what it claims, is the UK’s first socially-distanced dining concept.

Platform 15, at Escape to Freight Island, is part of the thrilling regeneration of Depot Mayfield, next to Piccadilly station, and the UK’s first socially-distanced outdoor gig venue, the Virgin Money Unity Arena in Gosforth Park, Newcastle.

Engine No.4, is a collaboration of individuals that have built a formidable reputation in the festivals and events industry.

With an impressive portfolio spanning the UK and Europe, the team would usually have a demanding Summer producing events for the likes of Parklife, bluedot, Lost Village, Kendal Calling and Depot at Mayfield.

As the pandemic closed down the events industry earlier this year, Engine No.4 focused its efforts on restructuring the face of the evolving event and festival landscape for the COVID era.

Bringing their knowledge and experience to fit the demands of the new norm, they delivered bespoke and considered solutions for two brand new concepts.

For the first project, Engine No.4’s production team worked with the team behind Escape to Freight Island on reimagining the space at Depot – creating a fully outdoor space and Manchester’s permanent urban market and festival space, which launched with a safe + social manifesto.

Jon Drape, a director at Engine No.4, led on the Escape to Freight Island build. He said: “As lockdown happened, we were in the middle of production for a series of Warehouse Project shows, at Depot, in Mayfield. It has clearly hit this world-class industry very hard, from suppliers to freelancers, so getting Freight Island off the ground and open was something I was very passionate about.

“When the Government legislation looked like it had moved enough, we mobilised a team of our trusted suppliers and crew and set about realising the designers’ vision of Escape to Freight Island.”

As Escape to Freight Island was in construction, the final phases of planning were under way for Engine No.4’s even more ambitious COVID-compliant project – the UK’s first purpose-built socially-distanced outdoor music arena in Newcastle.

Virgin Money Unity Arena is a dedicated socially-distanced music venue offering a month of gigs by musicians and comedians with 2,500 fans per performance, watching from hundreds of raised viewing platforms.

The space was launched by artist Sam Fender on August 11.

Sam Fender’s management team, Owain Davies, of OD Management, said: “It was a pleasure working with Engine No.4 on the first socially-distanced arena shows in the UK, incredible attention to detail, we couldn’t have asked for more.” 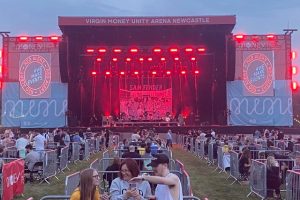 Jim Gee, a director at Engine No.4, designed and produced the site in Newcastle for Promoter SSD.

He said: “It was a challenge dealing with the Government’s evolving legislation, but when SSD approached us to do something at the racecourse we knew we could make it work. Engine No.4 worked closely with the promoter, with SSD booking the artists and promoting it – our remit took on the responsibility of site management, managing full technical production and local authority liaison.

“This was a real team effort in Newcastle, delivering an innovative concept that is shaping our times.”

Until Engine No.4 can operate as before, its directors are exploring events industry productions that are COVID-compliant in design and launch, delivering and reshaping entertainment and music events for now.

Events organiser awarded £168k grant from third round of Culture...

Join us to discover how uncertainty is changing M&A habits