The reintroduction of strict lockdown measures resulted in a renewed decline in business activity across the North West private sector in January, latest UK regional PMI data from NatWest showed.

The headline North West Business Activity Index – a seasonally adjusted index that measures the month-on-month change in the combined output of the region’s manufacturing and service sectors – registered 37.1 in January, down from 51.4 in December, and in sub-50 contraction territory for the first time in seven months.

The latest reading was below the UK average (41.2), but it was well above the record low recorded in April last year (19.7) during the first coronavirus disease 2019 (COVID-19) lockdowns.

The reimposing of national lockdown measures weighed heavily on demand for goods and services across the North West private sector in January.

Firms reported a sharp drop in new business that was the steepest since last May and more marked than the decrease seen across the UK as a whole.

A number of panellists also noted sales were down as a result of clients having built up stocks prior to the end of the Brexit transition period in December.

On balance, businesses operating in the North West remained upbeat about the outlook for activity in 12 months’ time.

There were hopes that the disruption caused by COVID-19 would start to fade as vaccines are rolled out, and also that any Brexit teething problems would prove short-lived.

Expectations even picked up slightly since December, though the overall degree of optimism was lower than the UK average.

Businesses in the North West resorted to further staff cutbacks in January, as they reported the need to cut costs and bring staffing capacity more into line with current demand. As was seen across the UK as a whole, the rate of job losses accelerated from the previous month, though it was still among the weakest seen during the crisis so far.

Underlying data showed that the decline in employment was centred on the service sector.

A lack of incoming new business in January meant that firms were often left to focus on backlogs of work.

The rate of decline in outstanding business accelerated to the quickest since last June, despite firms having reduced their staff capacity. That said, it was still much slower than seen during the initial lockdown last Spring.

January data showed another sharp increase in costs faced by firms in the North West.

The rate of inflation edged up slightly since December and was the quickest overall since April 2019. 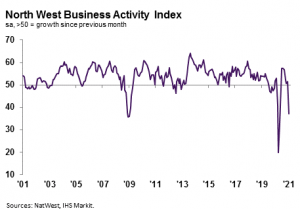 Having accelerated for the fourth time in the past five months, the rate of output price inflation across the North West private sector reached the quickest since February last year. It stayed above the UK average and was led by a sharp increase in manufacturing output charges.

Richard Topliss, chairman of NatWest North regional board, said: “There are two ways to look at the latest results.

“On the one hand, January saw business activity fall sharply and the pace of job shedding reaccelerate as lockdown measures were reimposed, with the rates of decline in the North West exceeding those seen nationally.

“However, a glass half full person would note that the latest lockdown has seen a shallower contraction than was recorded last Spring, that the rate of decline in employment remains slower than was seen on average last year, and that the region’s below-par results come on the back of a period of outperformance in late-2020.

“Furthermore, business confidence has remained strong during the latest lockdown, with local firms, instead, choosing to focus on the positives such as the rollout of vaccines, which is hoped will drive a strong recovery in the months ahead.”

Takeover deal abandoned after concerns raised over removal of...