Strong investment in Manchester’s office market provides a positive outlook for the city, although Liverpool’s market is less buoyant, a new report claims.

According to Avison Young’s Big Nine Q4 report, £325m-worth of investment deals were made in Manchester’s office market last year, more than any other major UK city outside of London.

Investment volumes across the Big Nine cities totalled £580m during the final quarter of 2020, two per cent up on the 10-year average, making it the busiest quarter of the year and providing a positive statement for the office market.

As expected, the effects of COVID-19 and the subsequent lockdowns are still being felt in the Manchester market, with take up in Q2 and Q3 of 2020 particularly hard hit.

However, demand for quality office space in the city centre remains high, with 800,000 sq ft of the total 1.3 million sq ft let being in prime city centre locations.

Mark Cooke, associate director at Avison Young, said: “Before the national lockdown 3.0 came into place, we were beginning to see people slowly returning to their office spaces and we expect this to continue when restrictions ease again.

“We’re still seeing activity and interest in space at the smaller and larger end of the market, but it’s the flight to quality that is still a major factor in letting and investment decisions.

“Although 2020 had its challenges, in terms of lettings, the first and last quarters of the year were in line with the figures for the 10-year quarterly average, with the BT deal at Four New Bailey helping to end the year on a high.”

He added: “The market is still in a state of flux, but as businesses focus on recovery, we expect to continue to see movement in the market but more so than ever before, it will be employees and their health and wellbeing that will be at the root of any decisions that are made.”

Meanwhile, demand in the Liverpool office market remains active at the very small end of the market, but Avison Young says it does not expect it to pick up for the majority of medium to large size occupiers until at least the second half of 2021.

However, there are a number of active requirements in the market and plenty of viewing activity, but the current uncertainty means decisions are being delayed and occupiers are not relocating or committing to new space. With an ongoing review of future occupational requirements, many of the larger occupiers are looking to reduce their footprints by 40% to 50%.

The report says: “Consequently, we are likely to see an increase in the amount of ‘grey space’ coming to the market over the next 12 months.

“Some of this will compete with existing grade A & B refurbished supply. We expect new grade A to be in the form of refurbishments and landlord-led flexible space as occupiers identify less but better-quality space.” 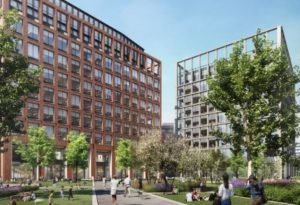 The next phase of office developments in Liverpool, such as Pall Mall and Liverpool Waters, are likely to require significant long lease pre-let commitments before starting on-site.

However, across the river on the Wirral, there are currently two grade A speculative schemes under construction, which are the first on Merseyside since 2011.

Hythe at Wirral Waters (25,000 sq ft) is being developed by Peel and will be completed later this year, and Building A2 in Birkenhead town centre (58,000 sq ft) is scheduled for completion in mid-2022.