The developers of globally-popular online football game Soccer Manager have set new international goals for the company after raising £3m.

Soccer Manager was founded in 2004 and its games have been downloaded by more than 50m players in 234 countries.

It now has more than 1m active users each month and the successful launch of Soccer Manager 2021 last September has helped increase revenues by 80%.

The company has also benefitted from the growth in the video games sector in the last year as Covid-19 restrictions have meant people spending much more time at home.

The fundraising will be used to grow its user base in the Middle East and Far East through local language translations, further develop its Soccer Manager 2022 game which is due to launch this autumn, and relaunch its original multi-player game, Soccer Manager World, by creating new apps and adding features.

Andy Gore, co-founder and chief executive of Soccer Manager, said: “We founded Soccer Manager with a vision to create high-quality football games that the whole world could play. We have always had the view that football, mobile technology and the internet is a powerful combination with which to achieve this vision.

“After years of building out our IP, technology and games to millions of people worldwide, this investment will help us further accelerate our current growth and deliver on our strategic ambitions.” 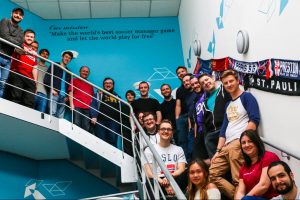 The Soccer Manager team in Preston

The investment round was led by Mercia, which first backed the Preston-based company in 2013 and 2014 through debt and EIS funds before it invested directly in March 2015.

The latest fundraise saw Mercia invest £750,000 directly, alongside £750,000 from the Northern Powerhouse Investment Fund’s equity finance pot, which Mercia manages, and £1.5m in matched funding from the Government’s Future Fund.

Julian Viggars, chief investment officer at Mercia Asset Management, said: “Soccer Manager is a great example of an innovative regional business which, with the determination of its founders, has scaled its recurring customer base and revenues by offering high-quality games to a very loyal community.

“The business was already on a strong growth trajectory before the pandemic but with the increasing numbers of ‘at home gamers’ not expected to slow down, we believe that there is significant further potential in this asset.”

On Thursday NPIF and TheBusinessDesk.com will be hosting the latest in a series of webinars. The topic is on rebuilding the regions and will look at how Northern grit alongside, adaptability and planning have enabled businesses to not only survive but prepare to capitalise on upcoming opportunities as the UK looks to build back better. Find out more and register for free here.

Fintech firm launched by former tennis professional is backed by...

Investment house raises £3m for ‘one of the UK’s most...