Sports fashion brand Castore will create 300 jobs in the next two years as part of its HQ relocation from Liverpool to Manchester.

The business has agreed a deal to relocate its company headquarters to One Central Street, part of The Albert Estate in Manchester city centre.

Castore has signed a 13-year lease with landlords Kinrise to occupy all available workspace – circa 22,100 sq ft – within the building, situated across five floors.

Founded in 2015 by brothers Thomas and Philip Beahon, Castore’s vision was to bring a new level of performance to men’s sportswear.

The brand currently sells products in more than 50 countries worldwide and boasts collaborations with sports stars such as Andy Murray.

Revenue is expected to reach £100m this year.

Castore will relocate all staff from current headquarters in Liverpool to Manchester this year and expect to create 300 jobs in the city in the next two years.

Phil Beahon said: “We are delighted to be moving to Manchester and opening Castore House as our global HQ in the city.

“It is clear for everyone to see that Manchester is a city with an incredible buzz about it and the number of fast growing, high tech businesses in the city were a real draw for us when choosing our long-term home for Castore.”

“The business has seen impressive growth since their founding and this significant investment will create 300 jobs, another endorsement of the city’s strengths in areas such as digital and e-commerce.

“We very much look forward to working with them, to both assist with their HQ relocation to the city and to match the talent in this city to the opportunities they bring.”

George Aberdeen, co-founder at Kinrise, said: “We are delighted to welcome Castore as the lead tenant at our 1 Central Street building in Manchester.

“Like all properties in the Kinrise portfolio, the newly refurbished former mill has been carefully re-designed to reveal the original character of the building, making it the perfect location in which a forward thinking business like Castore can thrive.” 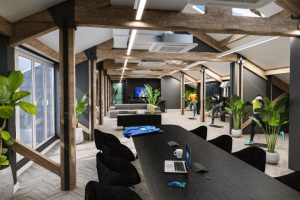 Plans for the new Castore HQ

OBI advised on the transaction. The team has also been appointed to design the new workspace and manage the refurbishment project.

Andrew Cowell, from OBI, said: “One Central Street is a building with character and will provide a brilliant space for Castore’s continued growth.

“The team required a creative space that would allow for collaboration and evolution. Manchester is a brilliant city for a business such as Castore.”

Tim Newns, chief executive of Greater Manchester inward investment agency MIDAS, said: “Castore is one of the UK’s most exciting and fastest-growing sportswear brands and we’re delighted to welcome them to Manchester.

“Not only will this be Castore’s HQ, but it will also include a new innovation hub, product development studio and content studio which, combined, will house 500 people over the next two years.

“It brings together many of Greater Manchester’s strengths, including sport, tech/ecommerce, fashion, creative talent, technical textiles and innovation and is further recognition that Manchester is the UK’s best city to scale a digital business.

“They will follow in the footsteps of our many unicorns which have benefitted from a diverse talent pool and tech ecosystem, and we look forward to continuing our support and seeing this innovative company reach its potential.”

Rents within One Central Street range from £25 psf-£28 psf. OBI is the sole leasing agent.

Castore has retail stores on the King’s Road in London and within the Liverpool One scheme in the city centre, and is expecting to open a further five stores around the UK in the next six months.