Liverpool City Council planning committee is due to hear the application next weeek.

The club postponed its bid to build the extension, which would add 7,000 extra seats, last April due to the coronavirus pandemic.

It had originally planned to unveil the expanded stand in summer 2022, but admitted last year that the earliest target date for completion is now summer 2023.

Next week’s planning committee will consider the club’s proposal to extend the Anfield Road stand, following partial demolition, to provide up to 7,000 additional seats and internal facilities including general admission concourses, hospitality lounges, a family fan zone, club offices, staff facilities and plant and equipment, with associated public realm, lighting; landscaping and associated infrastructure, and, to use the stadium for other team sporting events and to host up to 12 concerts and/or major events per annum.

The club also wants to close Anfield Road to traffic and include it within the new footprint of the extended stadium.

The application follows the expiration of outline permission granted in 2014 for a replacement Anfield Road stand, under planning permission for a new main stand, and the two preceding temporary consents for major events to be held at the stadium, expiring this month.

In their notes to the committee, planning officers say: “Whilst the proposed new stand would certainly appear more prominent at the south western edge of Stanley Park, its form appears to reflect its function and, aside from any discussion of any possible issues of visual impact on the listed park, it would in essence appear as an addition to an already large and prominent sports stadium.”

They add: “The potential effects of the development have been correctly assessed. Although the prominence of the new stand will cause some harm to the setting of heritage assets, this would be at the lower end of ‘less than substantial harm’ and not be substantially greater than the existing stadium and as such should be considered in the context of the public benefits of the proposal. 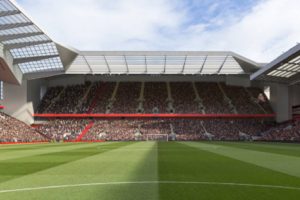 Another view of the expansion plans

“The public benefits include significant economic benefits for the local area and the city region which come from the use of the stadium for football, other sports and events, which will be further strengthened by the improvements to the quality of the accommodation and seating within the stand and the public realm proposed by this development.”

The application also illustrates the economic benefit of the club to the city region. Quoting a report by Kieran Maguire, of the University of Liverpool’s Management School, it said “each home match is potentially worth up to £2.5m to the city economy”.

Sportswear group signs with Premiership side Newcastle in latest kit...