Manchester-based technology business Culture Shift has secured £1.5m investment in a funding round led by Praetura Ventures and Blackfinch Ventures. Founded in 2018, Culture Shift has created a platform for people to confidentially and safely report workplace harassment. It says a growing body of research paints a worrying picture of the modern-day workplace. Research from Breathe HR in 2021 suggested almost a third of people in the UK quit their jobs due to toxic workplace culture. The report states that this churn costs the UK economy £15.7bn per year.

As the workforce ‘returns’ following lockdown easing, there could be further complications. According to Culture Shift’s own research, 37% of employees said they feel more likely to experience something they would describe as bullying or harassment while in the workplace. In a new hybrid world, this raises questions of how managers are going to attract employees back to offices.

The new funding will allow Culture Shift to make a significant number of new hires in Manchester, and expand into new markets across the UK, helping it support more UK organisations in proactively improving culture. This latest investment follows a funding round in March 2020 which saw Culture Shift secure £1.35 investment from Praetura Ventures and GC Angels. Since then, the business has significantly grown its client base and operations.

Culture Shift’s proprietary online reporting platform – which removes the barriers to reporting issues of harassment or bullying, enabling organisations to take a proactive and preventative approach to protecting their people and their culture – is now employed by more than 70 of the UK’s universities, while the business is working with a number of other organisations. Gemma McCall, CEO and co-founder of Culture Shift said: “We’re extremely proud that over one million people in the UK now have access to our reporting platform. This investment and the continued support from Praetura and Blackfinch will help us now continue our mission to help organisations better manage their own workplace culture with the right tools.”

David Foreman, MD at Praetura Ventures, which was advised by an Irwin Mitchell team led by corporate partner Adam Kaucher, said: “The work Culture Shift is doing is so important. Everyone wants to work in a place where they feel safe. Gemma and her team work tirelessly to make this a reality for so many people. We’re so pleased to be supporting them on their journey and excited to see them continue to improve the lives of workers in a variety of industries.”

Dr Reuben Wilcock, head of ventures at Blackfinch, said: “We were hugely impressed by the drive and ambition of the Culture Shift team, who all believe so strongly in the company’s mission to reduce harassment and bullying in the workplace. It is exciting to be backing such a forward thinking vision, and one that aligns so well with our own Environmental, Social and Governance (ESG) values.” 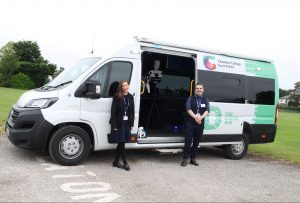 Committed to enhancing young people’s digital skills for the future, Cheshire College has taken technology directly to them with its state-of-the-art bus which is bursting with the very latest portable equipment including a life-size 3D robot. Cheshire College is on a mission to support the community with its five-year project ‘The Digital Hub’, which has been designed specifically to boost digital skills, enhance career pathways and develop confidence across communities with increased access to technology.

As part of ‘The Digital Hub’ project the College is focused on supporting local school children to develop skills in coding and virtual reality through its ‘Digital Doorstep’ initiative, which has seen College learners design and prototype robots for local high school pupils to interact with in their ‘Digital Hub Bus’.

Jordan Swift, director of marketing & school partnerships at Cheshire College, said: “The Digital Doorstep initiative is aimed specifically for school pupils to engage with new and emerging technology and equip them with the digital skills we know employers want and need at an early age. It’s been fantastic to be able to go into schools and showcase the digital technology and equipment to spark pupils’ imagination and creativity and we’re looking forward to be able to host many more events like this in the new academic year.”

Careers lead at Queen’s Park High School, Andrea Watts, said: “We took part using the College’s Digital Hub Bus during our school enrichment week. It provided the perfect opportunity to work in partnership with Cheshire College and enabled our Year 9 and 10 pupils to experience a taste of the digital revolution. The outreach activity has benefitted our pupils as they have had the opportunity to speak to industry experts from the college and use a wide range of equipment including the robot, which has enhanced their understanding of the digital world and transferrable skills for the future.” 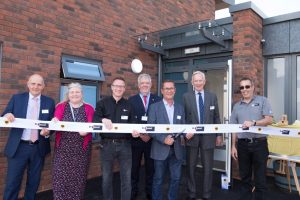 A new wing at East Cheshire Hospice, entirely funded by Macclesfield-based tray sealing specialist Proseal UK, has officially opened, following a 10-month build. The extension at the charity’s site on Millbank Drive, Macclesfield, will be known as The Proseal Wing, honouring the company co-founded by Steve Malone and Rob Hargreaves.

The two-storey building will act as a co-ordinated care hub for the charity’s Hospice @Home service – which has been an overwhelming success since it began almost four years ago – and the new coordinated care service, developed to help to guide both the patient and their family through the complexity of end-of-life care.

East Cheshire Hospice chief executive, Karyn Johnston, said: “We’re delighted and proud to be able to open this new building which provides such a valuable and significant resource to our community and is an essential part of our plans for the future. It’s only been possible thanks to the generosity of Proseal’s co-founders and we thank them sincerely.”

Steve and Rob said: “We have enjoyed immense success and growth in the 23 years since Proseal was established, and none of this could have been achieved without the fantastic support and commitment of everyone within the business. Proseal, therefore, wanted to give something back to the local community.

“We chose the Christie Cancer Centre and East Cheshire Hospice as the recipients because of the vital work they do, which any of us at Proseal, as well as our families and friends, may have to call on at some point.” 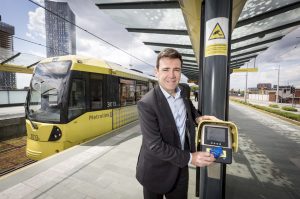 Ideal for commuters, it allows people to make unlimited Metrolink journeys across all zones Monday to Sunday and never pay more than a seven-day travel pass for those zones. The new offer supports the current ‘It’s Time’ campaign, which encourages more people to walk, cycle or get back onboard with public transport – to help cut down congestion, improve air quality and help Greater Manchester to get going again.

By simply touching in and out on every journey using the same contactless card or device, Metrolink will calculate each person’s fare up to the daily cap until the total reaches the weekly cap for the zones they have travelled in. After that, all other journeys in those zones will be free until the end of the week.

The Bee Flex Weekly is the latest travel offer launched by TfGM to maximise versatility and value for money for passengers and builds on the success of contactless daily capping – the Bee Flex Daily – with almost five million journeys having been made since its launch in July 2019.

Andy Burnham, Mayor of Greater Manchester, said: “Flexibility is more important than ever when it comes to using public transport. We know that how and when people travel may have changed during the pandemic and we’re now at a stage where thousands of people are going back to the workplace, to educational settings or simply getting out and about more. Metrolink, along with other transport operators, have introduced a range of ticketing offers to ensure that everyone can travel flexibly and affordably.” 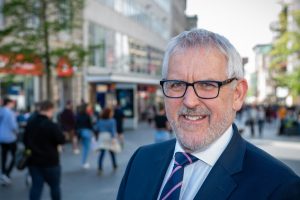 “Liverpool’s night time economy is world famous and we have seen the rapid rise in footfall over the past two months as the economy has reopened, but we need to continue to set a tone of being a city where you can go out, have a great night out and return home safely. Zero tolerance for homophobia means calling it out, it means making intolerance as unwelcome in Liverpool as violence.”

He added: “For businesses this means creating a safe environment, of ensuring that acceptance is part of everyday culture and behaviour. At Liverpool BID we are working with our partners in Merseyside Police and Merseytravel to identify ways we can improve visibility, security and make the city centre safer.

“We are working with LCR Pride Foundation and other LGBTQIA partners and organisations in Liverpool so that the community can define what the city needs to do to target intolerance.”