Hundreds of jobs could be created at the Broughton Airbus manufacturing site near Chester if the aviation group wins a Government helicopter contract.

Airbus currently employs around 4,500 staff at the plant making wings for its commercial aircraft. Around 2,000 jobs were lost as a result of the coronavirus pandemic when the world’s airlines were grounded and international travel came to a halt.

But under the company’s proposals, it could build an assembly line at the site, creating hundreds of jobs manufacturing helicopters.

It depends if the Government chooses its H175M model, a new military variant of a 7.8-tonne rotorcraft that has previously only been sold in the civil market.

It follows the Government’s decision to retire its existing Puma helicopter fleet from the middle of the decade.

A final assembly line could be in operation within 12 months of a contract being signed. It would be able to utilise the skills and experience that already exists at Broughton following years of wings assembly.

With sites in Aberdeen, Belfast, and Oxford, Airbus provides helicopter design, manufacturing, support, maintenance and training to its customers.

Airbus is also an important helicopter supplier to the UK Armed Forces, with 100 of its rotorcraft in service with the Ministry of Defence. These include dedicated helicopters for operations across the globe – including the Puma 2, the workhorse of the RAF, and recently subject to one of the most successful defence upgrade programmes in the UK.

Airbus Helicopters also provides aircraft for the UK Ministry of Defence Military Flying Training System, meaning that for more than half a century, every helicopter pilot in the country has been trained on Airbus Helicopters platforms.

In a statement, Airbus said: “Airbus Helicopters in the UK is aware of the Government’s intention to retire the Airbus Puma HC2 medium helicopter fleet, along with certain other types, in the middle of this decade and to seek a replacement known as the New Medium Helicopter. 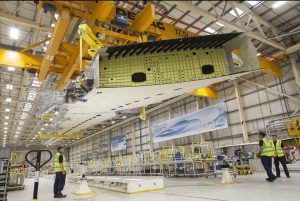 “While we await the issue by the Ministry of Defence of its formal specification, we firmly believe the Airbus H175M is fully capable of fulfilling the UK’s NMH needs and of becoming a sustainable UK export product with the potential to resurrect the capacity and capability of the UK’s helicopter industry, in part through the creation of a new helicopter plant at the existing Airbus commercial aircraft site in Broughton.

“The civil variant of the H175 is by far the most capable super medium aircraft on the market, with 26 already in daily North Sea operation off the coast of the UK, and excellent export prospects for the proposed military variant.

“We look forward to taking part in the competition to provide the NMH and if successful we are ready to invest substantially in the UK to create an advanced new helicopter manufacturing/assembly facility directly employing many skilled Airbus workers and sustaining hundreds more jobs in the wider UK supply chain.

“This activity would support the Government’s levelling up agenda and create an attractive exportable product capable of serving military customers worldwide.

“Our plan would seek to establish a H175M Final Assembly Line in an existing facility on the commercial wing manufacturing plant’s footprint at Broughton. We would also transfer a number of key high value component manufacturing capabilities to the UK supply chain. We would emphasise our demonstrable track record of making long term, high value investments in the UK.

“In short, this is a medium to long term ambition and we are at the very outset, but we are excited by the opportunity and believe we could revolutionise the UK military helicopter market if selected.”

Airbus in Chinese deal for hundreds of new aircraft

Security manufacturer to create jobs and boost turnover with...