The HOST Esports Studio is the first of its kind to launch in the heart of MediaCity to offer a dedicated training space for local esports teams and bootcamps, focused on fostering future gaming talent and supporting the development of the esports and XR immersive community in the North West.

HOST, the Home of Skills & Technology is partnering with Vexed Gaming, one of the UK’s leading esports organisations in Manchester, to support local talent at the HOST Esports Studio alongside education partners the University of Salford, to engage with young people interested in the digital and media-related skillsets esports offers in formal education.

To celebrate the launch of the HOST Esports Studio, HOST welcomed Manchester’s World Esports Day to MediaCity on Saturday October 23, in partnership with The University of Salford, Salford Esport and Salford City Council, bringing together Manchester’s esports student societies to celebrate all things esports. World Esports Day is a joint initiative set up by the British Esports Association, a not-for-profit organisation that promotes and supports grassroots esports, along with streaming platform Twitch, the Singapore Esports Association (SGEA) and the Global Esports Federation.

The HOST Esports Studio will offer a training ground for esports, sporting local tournaments and act as a central gateway for stimulating skills and employment routes for young people to get into this emerging sector. The esports industry is continuing to increase in popularity as global market revenue is predicted to grow to $1.62bn in the next three years, and according to a study by Hitmarker, the number of jobs available in esports globally grew by 87% from 5,896 in 2018 to 11,027 in 2019.

HOST is working with industry to create an accessible, multi-disciplinary studio, to advocate esports related skills to prepare the next generation for tomorrow’s jobs, today. It is building on its existing technology pedigree to establish an esports academy as part of its Skills City bootcamps, committed to providing fair access to digital skills training and breaking the barriers faced by those from under-represented and disadvantaged backgrounds, with links to its immersive labs and the UK Unity Centre of Excellence, a world leader in real-time 3D (RT3D) content.

Mo Isap, CEO of IN4 Group, operator of HOST, said: “The incredible explosion of the esports market is continuing at a global scale, and we are excited to be leading on this accessible esports skills programme with our partners Salford City Council,” while Dr Maria Stukoff, co-chair Esport Industry Partnerships at the University of Salford, said: “This is really very powerful. This unique collaboration brings together local businesses and councils, esports professionals and educational giants all working together to develop a dynamic platform to engage with our local esports community and to connect talent straight into the industry.” 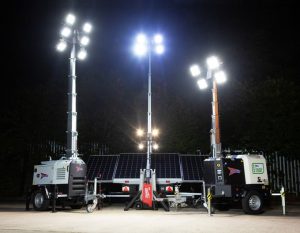 Newton-le-Willows-based equipment hire and services provider, Speedy, has been selected to light up the perimeter of the COP26 climate summit in Glasgow next week with a sustainable lighting system that will save an estimated 6,200 litres of diesel and 16 tonnes of CO2e.

Speedy’s National Support Centre, located in Glasgow, is providing a total of 400 linear lights which will run for two miles around the security perimeter of the venue. The bespoke solution developed by Speedy specifically for the event is made up of LED lighting towers and low energy beam control lighting heads. They are highly efficient, offering up to 200 lumens, or light energy, for each watt of power consumed.

The lighting system, which will be in place for five weeks, will prevent noise pollution and fumes that would be produced if the lighting was powered by diesel. Speedy’s low carbon lighting system is also used on a number of other major infrastructure projects where sustainability is central, including HS2 and national core renewal rail projects.

Daryl Doherty, rail director at Speedy, said: “As such a historic and significant climate event, COP26 needed a supplier with the technology to deliver a low carbon solution to lighting, minimising the impact on the environment. COP26 will set out the gold standard for green events, so everything that goes into its infrastructure and management needs to be sustainable.

“Speedy is a leading supplier of low and zero emission lighting, which is helping contractors in the events, construction and rail sectors to slash emissions. Being selected as the delivery partner to light up COP26 recognises our track record in delivering sustainable solutions across major UK projects, and offers us a fantastic opportunity to demonstrate how our innovative low carbon lighting technology can play an important role in delivering a carbon zero project.”

Dan Meis, at a stadium workshop

Everton Football Club has announced that Dan Meis, the concept architect for the club’s new stadium at Bramley-Moore Dock, will continue his association with the £500m stadium project as he takes up a new guardianship role.

Meis’s initial role in the stadium project came to a natural end in the summer of 2020, said the club, as the scheme moved from the concept to technical phases. He, however, disputed this, expressing his surprise at the time, saying: “In my 30 years of designing stadiums, I have never had our work taken over by another architect without remaining in a custodian or oversight role.”

Now, working under Everton’s Stadium Development Director, Colin Chong, and alongside the project leads from construction partner Laing O’Rourke and architects BDP Pattern, Meis’s role will involve reviewing the technical construction specifications and engaging the compliance team ahead of each stage of development to ensure the original design concept remains in place throughout the build.

Confirming Meis’s return to the project, Everton chairman Bill Kenwright, said: “Dan has been an important part of our stadium journey so far and we are pleased he has accepted this new role.

“In working alongside both our in-house and external teams, Dan will be joining some of the best technical talents in the country throughout the exciting construction phase of the project.” 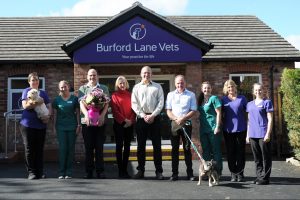 Nine new jobs have been created following a £500,000 investment in a new state-of-the-art veterinary practice on Burford Lane, at the former Pets Animal Hotel kennels in Lymm, Cheshire.

A team of veterinary professionals with more than six decades of combined industry experience will run Burford Lane Vets, including Dr Sean Cleary, who is well known throughout the North West for his vast breadth of experience and knowledge in small animal care. Dr Cleary is joined by Dr Pieter De Villiers, and two head veterinary nurses, Ashlee Crook and Gemma Scott, who have all been working in Lymm for many years.

Dr Cleary said: “I’m originally from New Zealand and started my UK veterinary career in Warrington and have worked throughout Cheshire for the last 20 years. I’m delighted to be opening my own practice in Lymm, alongside Pieter, who is a highly respected local vet. Our team lives locally and believes strongly in providing a caring and accessible service for our local community of pet lovers. Locally-owned and locally-managed, we are a traditional veterinary practice that embraces technology and puts pets at the heart of what we do.”

Dr Villiers said: “As a new start-up, we are able to register pets right away and provide high quality veterinary care in a timely manner. According to the Pet Food Manufacturers Association, a total of 3.2 million households have acquired a pet since the start of the pandemic and this has led to increased pressure on existing practices, meaning many are unable to see people quickly or take on new clients.” 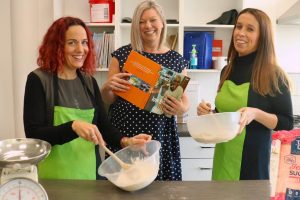 Chorley Building Society has donated £10,000 to Inspire Youth Zone Chorley, to empower young people across the region to take control of their diets through basic nutrition and cookery skills. Inspire Youth Zone has been chosen as the main beneficiary for the society’s ‘High Five’ campaign, which commits to donating a minimum of five per cent of its operating profits to local causes every year.

Karen Hunter, head of fundraising and communications at Inspire, said: “We are absolutely thrilled that Chorley Building Society has chosen to support Inspire, and in particular, our hot healthy meals initiative. Chorley has one of the highest rates in the UK for teenagers adopting unhealthy relationships with food and 14 % of children aged 10-11 are classed as obese. We want to try and change the narrative and believe it starts with giving young people enough knowledge to begin influencing what they eat at home and during school breaks.

“Inspire’s Learning Kitchen teaches young people basic nutrition and cookery skills in a fun, interactive way. We hope that these sessions will encourage families in Chorley to eat healthily and give children key life skills that will help them thrive at home and school.”

Kim Roby, customer services director at Chorley Building Society, said: “Inspire deliver such fantastic and vital work for young people living within our local community, and we are very proud to be able to support them through our new community initiative. Chorley High Five has been set up to support local people during these challenging times and help tackle issues like poverty, homelessness and child hunger.”