The four-star 17-storey, 278-room development is situated off Oxford Road, opposite Circle Square and was developed by a joint venture partnership between Sir Robert McAlpine Capital Ventures and Catalyst Capital.

The opening follows an announcement by Dalata, which operates almost 50 hotels across the UK, Ireland and Germany, that a second Maldron Hotel will start construction on Chapel Street later this year. This hotel now joins its sister hotel, the Clayton Hotel Manchester City Centre, also operated by Dalata, which opened its doors earlier this year.

Dalata said the new Maldron Hotel has received more investment to the ground floor than any other Maldron Hotel.

Dermot Crowley, CEO of Dalata Hotel Group, said the continued investment in Manchester reflected the company’s confidence in the city: “We are opening a second hotel in Manchester in the space of two months. It demonstrates our belief in Manchester as a city. There are many reasons for corporate and leisure customers to visit the city which makes it an ideal location for Dalata Hotel Group to invest in.

“We have an experienced and talented management team led by general manager Carl Davies, who has been with the Dalata Hotel Group since 2016. They look forward to welcoming guests to the hotel and introducing the Maldon brand to the city of Manchester.” 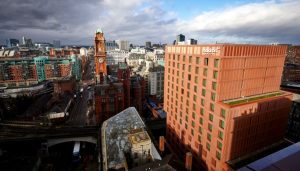 Hotel is situated off Oxford Road

Sheona Southern, managing director at Marketing Manchester, said: “We are pleased to welcome the opening of this brand new Maldron hotel, which is yet another mark of the strength and resilience of the visitor economy in Greater Manchester, which has seen visitor levels making a strong comeback.

“The hotel’s location is an integral part of the new Circle Square neighbourhood, offering a significant new area in Manchester city centre for visitors to explore, and is ideally placed for the future Innovation District on Oxford Road, making it a fantastic choice for both business and leisure travellers.”

Feedback welcomed on plans for new homes in Edenfield