In a busy agenda, plans for a residential scheme, Kingsway Square, on Blackstock Street and Paul Street, in the Kirkdale ward of the city, were finally approved, following an impassioned rant by local Cllr Joe Hanson on delays to several schemes.

The proposal was originally submitted by Caro Developments in March 2021, and approved by the committee.

Since then, Caro has withdrawn from the process. Blackstock Street Ltd owned the site, and sold its shares to Kingsway Square Ltd, in April 2020, and the applicant is now Sourced Development Group, which is progressing its Kingsway Square plans.

The original plan was for 452 units in a 10-, eight- and seven-storey scheme. This was then amended to 392 units. Permission was granted subject to the applicant entering into an S106 agreement, for improvements to the local area, worth £1,146,971.70.

But Caro said the payment made the scheme unviable. Following an external review, the S106 payment was reduced to £740,000.

However, the latest version of the scheme now involves plans for 310 units – 154 one-bed and 156 two-bed – although the S106 payment remains the same. The recommendation from planning officers was to approve the latest application.

Discussions ensued over whether the council could, retrospectively, increase the S106 payment on build completion, which was dismissed

“The dereliction and nonsense that’s going on within Kirkdale, Vauxhall ward is an absolute nonsense, and I don’t think we help the process.

“I am really really struggling with how this council is dealing with these stalled projects across the Vauxhall part of Kirkdale, and more importantly, the residents are sick to death with the councillors, with the council for allowing this kind of condition to exist in our area.”

The application was approved unanimously.

However, the next item, for a scheme that was previously approved in December 2019, failed to win approval.

The site was previously home to a probation centre and church, which have since been demolished.

But, due to the time period that has elapsed since the original approval, the application, needed to be reconsidered. Again, council officers recommended approval.

However, strong objections were raised about the loss of trees, conservation issues, traffic and air pollution, and the existing abundance of student accommodation.

This was backed up by Cllr Billy Lake, who said: “This development is incongruous to its surroundings. Over-development of student accommodation is undermining the traditional communities of our city.”

Sonia Bassey, speaking on behalf of the community, claimed there is still a restricted covenant in place regarding the future use of the site.

In response, council officers said covenants are private matters to be dealt with by developers.

Committee chair, Cllr Tony Concepcion moved to the vote, backing the application, but Cllr Hanson moved an amendment to reject it on the grounds of lack of parking and residential amenity.

His amendment was carried by five votes to four, meaning the application was refused. 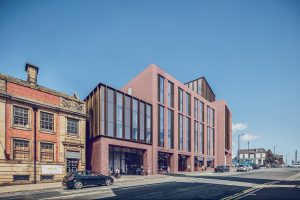 A plan to build a three- to nine-storey development for a 274-bedroom hotel, and a commercial unit, on land bounded by Prescot Street and Low Hill, in the Central ward was approved.

The proposal, by Equity Group and The Elliot Group International, was initially considered in November 2019, and recommended for approval. But the legal agreement was not completed, and so needed to go before the committee once more.

The site, close to one of the main approach roads into the city, is described as brownfield and is within the city’s Knowledge Quarter.

Cllr Pat Maloney said he was concerned about the scale of the development, while Cllr Lake objected to its design, saying: “This is a city full of listed buildings and yet we keep repeatedly planting brown boxes around the city.”

The application was approved by five votes in favour, one against and one abstention.

Councillors also approved proposals for a new Lidl supermarket in Belle Vale, which will create 32 jobs.

Officers recommended approval, despite more than 60 objections, including one from rival supermarket chain, Morrisons. Alternatively, there were 114 responses in favour of the development.

The site was formerly home to the Coronation pub, a single storey bookmakers, and Childwall Brook nursing home, which were demolished more than 10 years ago, leaving vacant land.

The site is on a busy part of Childwall Valley Road and three people – Fr Jonathan Brown, Shirley Davies and Cllr Ruth Bennett – spoke to the committee about their concerns regarding traffic management.

But, before moving to the vote, Cll Concepcion remarked: “Officers are satisfied with the arrangements put in place.”

The proposal was approved unanimously.