The two leaders were told about about the progress that has been made to transform the derelict dock in north Liverpool into the club’s new waterfront home, which is scheduled to open in time for the 2024-25 season.

The tour included an explanation of the enormity of the enabling works, including the engineering feat of infilling the dock and the intricate preservation of the site’s heritage assets.

The delegation also saw how the four concrete corners of what is to become the club’s stadium have risen and the foundations being laid to connect each of the corners ahead of the first sections of steelwork arriving this summer.

Denise Barrett-Baxendale said: “We were we pleased to welcome Mayor Rotheram and Cllr Morgan to Bramley-Moore Dock and show them the progress being made on site.

“The importance of this development to not only our football club but our city region cannot be underplayed or underestimated.

“What Everton Football Club is delivering at Bramley-Moore Dock is truly transformational and our city region leaders have a real ‘once-in-a-generation’ opportunity to harness the incredible package of socio-economic benefits on offer including the financial boost to our local economy, the creation of tens of thousands of jobs, the millions of new visitors our stadium will attract and the accelerated regeneration of two sites in North Liverpool.”

The two sites are Bramley-Moore Dock and the club’s current Goodison Park ground, which will be demolished and developed to provide legacy facilities such as housing, community hubs, offices, and retail spaces. Plans for the demolition of Goodison will go before Liverpool City Council’s planning committee next Tuesday (May 3).

Throughout the planning and construction process of Everton’s new home, the respective heads of the regional boroughs that make up the Liverpool City Region have all been fully supportive of the project.

Steve Rotheram said: “The Bramley-Moore development stands as one of the most significant regeneration projects our region has seen in more than a decade and will be a major catalyst for regeneration and revival in an area that has been crying out for investment for decades.

“It’s not just about a football stadium, but is an important project that will generate a myriad of social and economic benefits for communities across our region. From creating thousands of local jobs, training and apprenticeship opportunities, to attracting hundreds of thousands of new visitors to our region and launching programmes that will help to tackle health and social inequalities.”

He added: “It was fantastic to visit the site and see how things are progressing – especially the important work to preserve the heritage of the site, partly funded through our £15m grant.” 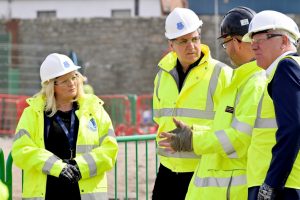 Everton’s development at Bramley-Moore Dock is recognised as the largest single-site private sector development in the country, contributing an estimated £1.3bn to the local economy, creating tens of thousands of jobs and attracting 1.4m visitors to the Liverpool City Region.

Once the three-year build is complete, the scheme could have acted as a catalyst for more than £650m-worth of accelerated regeneration directly benefiting North Liverpool, the club said.

Everton has been on site with preparatory and enabling works since July 2021, following unanimous approval by Liverpool City Council to grant planning permission, in February 2021.

Earlier this month, the club announced it had signed an agreement with Laing O’Rourke which will see the contractor deliver the next and final phase of development of the new ground.

This was despite the club’s perilous Premier League position, which saw it slip into the bottom three relegation slots after the weekend defeat to arch rivals Liverpool at Anfield, heralding the prospect of dropping out of the top league for the first time in 71 years.

Feedback welcomed on plans for new homes in Edenfield