The developments are part of FCHO’s strategy to deliver 700 new, high quality, energy efficient properties in Oldham, Rochdale, Tameside, Kirklees, and Calderdale between now and 2026 to help meet housing need and improve the lives of local people.

In Failsworth, FCHO is working with Holcombe Homes to bring forward a £4.9m scheme of 14 four-bedroom and four three-bedroom properties on brownfield land next to Hale Lane and Hughes Close.

Fifteen homes for shared ownership are planned, helping local people to get a foot on the housing ladder at an affordable price. Three homes will be for affordable rent – set at no more than 80% of the average local market rent.

The £3.7m development on a brownfield site on Shaw Street, Royton will be built by Robwood Construction. The contractor is delivering 15 one-bedroom and 15 two-bedroom apartments, all for affordable rent.

Helping to minimise their carbon footprint, the apartments located close to Royton centre are planned to achieve an Energy Performance Certificate (EPC) B and will be equipped with modern electrical heating to help cut carbon emissions.

Work at the Failsworth and Royton sites is planned to commence this summer with projects due for completion at the end of 2023.

A new building under construction at Lancashire Business Park near Leyland will provide a current tenant with more space to develop their business.

Construction is under way at the industrial park at Farington and is due to be completed in the next few months.

The 68,000 sq ft building will be equipped for the changing face of business and the emerging green agenda with solar panels and EV car charging points. The unit has been pre-let to neighbouring tenants Accrol Group, the independent tissue manufacturers.

Mark Dewhurst, chief operating officer of Accrol, said: “We employ a strong team of around 100 colleagues in Leyland and are excited to be investing further to expand our operations and support the ongoing growth of our business.”

County Councillor Tim Ashton, chairman of LCDL, said: “This is already a popular business park and we’re really pleased that this new unit will help us provide more space for Accrol. We’ve seen their business develop while based here and we’re proud to be supporting their plans to grow even further.”

Construction is being carried out by the Bamber Bridge-based company Eric Wright Group, through the county council’s Strategic Partnership Agreement. 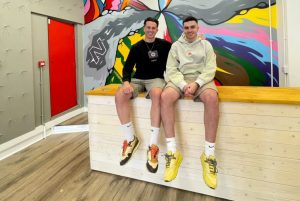 Sam, left, and Ben Kersh, in the Liverpool store

Liverpool-born siblings, the Kersh brothers, continue their UK expansion of their original ecommerce business; KershKicks with its new Liverpool store. It’s a first for the city, with KershKicks being the only buy, sell and trade trainer store.

The brand launched by brothers Ben and Sam Kersh in 2019, is opening its third store in a matter of weeks. It will be the first specialist sneaker store selling rare and exclusive limited editions, streetwear and deadstock collections.

The new Liverpool store, on Slater Street, will span 10,00sq ft, the biggest for the brand to date, and create 10 jobs.

Sam, 27, said: “It’s been an amazing journey so far and we couldn’t be more excited to take the next step in our home city. Scousers have been some of our most loyal customers and Instagram followers and have supported us since the very beginning. So, we can’t wait to welcome everyone through our doors.”

KershKicks is known for being home to the most exclusive, hyped streetwear clothing in the UK, including Supreme, Palace and Anti Social Social Club as well as its ever-growing range of sneakers including the world’s most sought after designs such as Air Max, Dunks, Jordans, Yeezy’s, New Balance and more.

Sam added: “What makes us different is our buy, sell, trade model making us a hub for both sneaker enthusiasts and the casual sneaker fan. We offer people the opportunity to make money on their own collections and trade for their most desired grails.”

The brothers already have stores in Manchester and Glasgow which opened in 2019 and 2021, respectively. 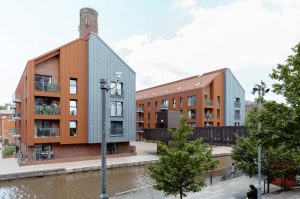 DLA Architecture has completed works on the redesign of the historic Shot Tower in Chester and handed over the completed scheme.

The site of the prominent landmark building has been transformed into a 72-unit residential-led development by Manchester-based developer Whitecroft Group. The significant redevelopment incorporates the restoration of Grade II-listed industrial heritage buildings together with new-build elements.

The 168 ft tall Shot Tower is located alongside the Shropshire Union canal and in the heart of Chester city centre. It is the only surviving leadworks of its kind, dating back to the 18th century and was one of the earliest lead shot manufacturing sites to utilise the method pioneered in the 1780’s by inventor William Watts for British muskets during the Napoleonic Wars.

Jonathan Knowles, director at the Manchester office of DLA Architecture, said: “Our brief was to deliver a high quality design that was commercially viable and market facing whilst fully recognising and utilising the existing Shot Tower. The site has been abandoned for some time and the tower contributed to heavy contamination and as such there were several technical issues to overcome alongside archaeological sensitivities.

“We have worked very closely with the team at Whitecroft Group and had positive consultations with local interest groups, the local authority planning department and Heritage England to arrive at a scheme that reflects the industrial heritage of the former lead works using a palette of copper and grey standing seam metal cladding and Cheshire red brick.”