An historic Cheshire estate has come to market for the first time, with a guide price of £30m.

The Adlington Hall Estate has been the ancestral home of the Legh family for the past 700 years.

Joint agents Savills and Mark Wiggin Estate Agency are handling the sale, either as a whole – which includes the architecturally important Adlington Hall, six equipped farms, 21 residential properties, an events space, a village hall, and a total of 1,922 acres – or split into 25 lots.

The hall can be traced back to Saxon times and the house was held by Norman Earls for seven generations until 1221 when it passed to the Crown.

Henry III passed the manor to Hugh de Corona, and on the marriage of one of his granddaughters to John de Legh of Booth, Adlington Hall became the ancestral home of the Legh family.

The hall is a Grade I-listed house with a rich architectural history.

It has a distinctive Tudor façade to the east and an imposing Georgian front to the south. Records show it was once surrounded by a moat.

The Great Hall on the north side was added between 1480 and 1505 and later additions to the house are evident. After two sieges during the Civil War and years of neglect, some restoration work took place, but the next era of significant change began in 1739 when Charles Legh inherited the house.

During his tenure it was transformed from a medium sized Tudor house into a large Georgian Manor house. The next large scale structural changes occurred in 1928 when much of the west wing side of the quadrangle was replaced.

The gardens and grounds around Adlington Hall are of equal historic interest and include the pleasure gardens knows as The Wilderness, which along with several follies have survived many hundreds of years under the Legh family’s careful management.

There are a further 27 residential properties spread across the estate, six form part of farm tenancies and others include period mews houses, lodges and semi-detached cottages. The portfolio is let on a range of occupancies.

The agricultural land is split between pasture and arable with cropping typically cereals and maize. Also, 1,229 acres are let on six separate agricultural tenancy agreements, the farms include principal farmhouses along with both traditional and modern farm buildings.

Around 160 acres are in hand which are predominantly parkland around the hall. There are 208 acres of mixed woodland across the estate. 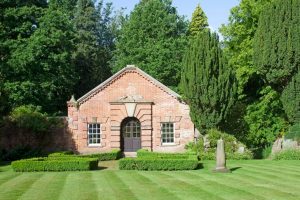 The agents say Adlington Hall Estate provides a diverse rural investment opportunity. Most of the £430,000 per annum income is from the residential, commercial, and agricultural rent rolls which is supplemented by some in hand and trading income from events, public openings and other ad hoc arrangements.

Hunting Lodge is an event space which has been used for a variety of events including weddings. The main space is on the first floor and has been sympathetically converted retaining many period features.

Land suitable for habitat enhancements to meet the demands of existing and emerging local policy surrounding biodiversity net gain has been identified and allocated.

The estate is one of the first to offer its land for fulfilling off-set BNG units to developers in Cheshire.

Rhydian Scurlock-Jones, director at Savills in Telford, said: “The Adlington Hall Estate has a rich and varied history and the estate has evolved over time. Today, many traditional elements that are synonymous with an estate of this importance are complemented by diverse income sources, the most recent being its commitment to providing habitat enhancements for local development.”

Mark Wiggin, of joint agents Mark Wiggin Estate Agents, said: “It is not often you can say a house/estate has not been for sale for over 700 years. That, in itself, shows how remarkable Adlington is. We all hope that we can find somebody who appreciates the history and the opportunities the estate has, and continues, to offer.”

Prime Manchester development site up for auction with £1.5m guide...