The restaurant is in the former Bank of Liverpool building, following extensive works being undertaken to bring the historic building back to life.

It will showcase Gaucho’s recent evolution in menus and design, inspired by modern Argentina and all its global influences.

The 200-cover building has had a seven-figure investment aimed at capturing the elegance and passion for the cultural and culinary heritage of modern Argentina. In addition to the restaurant, the venue will also boast a 90-cover bar area, two private dining rooms as well as a ‘Beef Bar’ where guests can enjoy experiences such as a beef and wine masterclass.

The elegant architectural features of this Grade ll-listed building will be layered with Argentinian details inspired by the essence of Gaucho.

Guests will be greeted with two large bronze tiger’s heads that have been a feature on the main doors of the building where the teeth are polished due to passers-by rubbing them for good luck, a tradition started by Somali and Indian sailors many years ago.

With grand high ceilings, stunning original timber panelling and a beautiful original marble fireplace featuring a carved Liver Bird, the restaurant is set to create an iconic destination within the spirited city of Liverpool.

The restaurant will be the first in the city, says Gaucho, to exclusively serve carbon-neutral beef, embodying CEO Martin Williams’s vision for the way that restaurants should operate responsibly, both socially and environmentally.

Gaucho Liverpool represents a major development in the Gaucho brand, and a key moment for the Sustainable Steak Movement, which Williams launched in autumn 2021 to accelerate the transition towards more environmentally-friendly beef production. 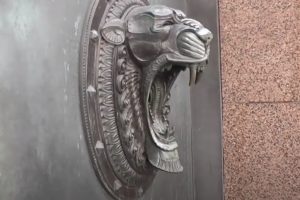 The à la carte menu, overseen by culinary director, Mike Reid, features contemporary Latin American starters such as Shrimp Ceviche and Empanadas. These are followed by a selection of 100% carbon-neutral steaks from Black Angus cattle, bred in Argentina from the Pampas provinces. Alongside the steaks, further main courses include the likes of vegan Pasta Alla Norma and Whole Grilled Seabass with Herbs and Lemon, while desserts feature Gaucho’s signature Salted Dulce de Leche Cheesecake.

The brand’s sustainable drinks programme promotes biodynamic, organic and natural wines – all restaurants operate a zero food to landfill policy, and all sites run on 100% renewable energy. By 2030, all Gaucho restaurants aim to be net zero carbon emissions.

Gaucho Liverpool is set to open on November 28.