Manchester Airports Group (MAG) has announced the final phase of its £1.3bn transformation programme, with a £440m investment forecast to create thousands of jobs and unlock billions of pounds of economic value for the region.

The work will create more than 500 construction jobs in the two-year phase which will deliver new spacious facilities, state-of-the-art technology and equipment, and an exciting array of shops, bars, restaurants and airport lounges.

It will see Manchester Airport expand its role as the UK’s global gateway in the North, connecting the region to even more international destinations, including some of the world’s most important economic markets.

The investment is the final phase of the £1.3bn Manchester Airport Transformation Programme (MAN-TP), first announced in 2015 with a 10-year vision to revolutionise the customer experience at the Northern hub and unlock the potential of its two full-length runways.

The first phase saw Terminal 2 more than double in size, with the new facility having received positive feedback from passengers and airlines since opening in July 2021. 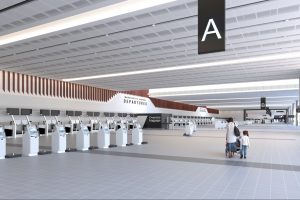 This latest investment will complete the transformation of Terminal 2, delivering improvement to all stages of the passenger journey, from check-in to baggage reclaim, as well as upgrading its airfield to cater for next generation aircraft.

On completion in 2025, around 80% of all passengers will use the expanded Terminal 2, with Terminal 1 set to close, 63 years after it was opened by the Duke of Edinburgh, in 1962.

Independent analysis shows around 16,400 extra jobs will be generated by 2040 as a result of the economic activity stimulated by the expansion of the airport and its route network.

The same research, by York Aviation, reveals that Manchester Airport’s current contribution to the Northern economy of £3.5bn is expected to soar by nearly 80%, to £6.3bn by 2040 as a result of the full delivery of the transformation programme.

And a further £2.9bn boost will be triggered through the increased productivity of businesses travelling and trading globally through Manchester over the same period.

Charlie Cornish, CEO of MAG, said: “Manchester Airport is a key economic asset for the North, and this investment will maximise the contribution it makes to creating a balanced and globally competitive UK economy.

“Our £1.3bn transformation programme demonstrates our long term commitment to providing a great airport experience for passengers who travel through Manchester. I’m delighted to be announcing the go-ahead for the final phase, which will open in 2025, connecting the people and businesses of the North to dozens more global destinations, and creating jobs and stimulating increased levels of trade and tourism.”

Chris Woodroofe, managing director of Manchester Airport, said: “It is hugely exciting to be announcing this significant investment in Manchester Airport. It represents a major milestone in the history of both our airport, and the region as a whole.

“By completing the transformation of Terminal 2, we will not only be offering passengers across the North an unrivalled choice of destinations, but also providing them with world class facilities and a great overall experience when they travel through Manchester.”

Transport Secretary Mark Harper said: “As the aviation industry recovers after COVID, it’s great news to see this significant vote of confidence in the UK.

“This investment will be a huge boost for the North, benefiting passengers flying in and out of the region as well as supporting thousands of jobs.”

The expanded Terminal 2 has already welcomed a number of new airlines to Manchester, and seen the launch or relaunch of a string of key routes.

Examples include a brand new service to Kuwait, a revived service to Beijing and a first UK Transatlantic base for AerLingus.

Enabling works for the second phase of the project are already under way, and planned improvements include:

Andy Burnham, Mayor of Greater Manchester, said: “Manchester Airport is a massive asset to our city region, connecting those living and working here to global destinations, as well as helping attract visitors, tourists and inward investment.

“The further investment in the Manchester Airport transformation programme will enhance Greater Manchester’s international credentials and make a major contribution to the northern economy.

“The project is also doing a huge amount to create employment for people from all backgrounds and providing training that will ensure it leaves a skills legacy for future generations.”

“This scale of investment, underpinned by a long term vision to transform the airport and its facilities, is a real statement of confidence.”

Henri Murison, chief executive of the Northern Powerhouse Partnership, said “As the international gateway to the North of England, Manchester Airport acts as a critical player in our economy, supporting thousands of jobs and unlocking billions in economic value by facilitating tourism, trade and investment.

“This major investment will sit at the heart of plans to make the North one of the most competitive economic regions in the world, helping the North realise its full potential while rebalancing the UK economy.”