A former retail unit in Lichfield is set to be transformed to house a 25-metre pool as part of a push to get the UK fit after the Covid pandemic.

All Blacks rugby legend Zinzan Brooke and Team GB Olympics swimmer Abbie Wood have got behind plans to turn the empty store at Lichfield Retail Park, on Eastern Avenue, into Swim House, the first in a series of openings planned to take place nationwide.

The plans, being shaped by community interest company Swim House Lichfield CIC, will see the former Carpetright premises become home to a three-lane pool for swimming lessons and leisure.

Up to 13  jobs are expected to be created with the opening of the centre, which will be used for a mix of formal swimming lessons, leisure classes and community uses.

A baby pool, a viewing gallery and changing rooms are among the other features of the centre, which Swim House Leisure expect to be the first of dozens to be established across the UK.

Taking time out of her training schedule ahead of travelling to Tokyo with Team GB for the Olympic Games in August, Abbie joined All Black star Zinzan at the launch event for Swim House Lichfield yesterday.

Abbie said: “It is exciting to see the Swim House concept taking shape. It appeals to me as Swim House offers a positive environment where young swimmers can learn so I was pleased to visit to see the plans are heading in the right direction. 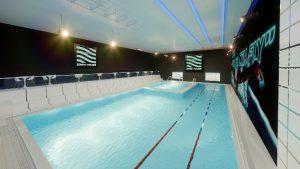 “A year of swimming has been disrupted due to Covid, with many young people missing the chance to learn. Hopefully, Swim House can get people back in the pool and enjoying swimming.”

Fellow Swim House ambassador Zinzan Brooke played for the All Blacks between 1987 and 1997, playing 58 tests and 42 matches. He scored 195 points and is considered one of the best All Black number eights.

“I’m aware of reports suggesting as many as 30 per cent of children in the UK do not know how to swim, which means lives are at risk. I wanted to give my time to help realise this project because our towns and cities are going to change due to Covid, so we need sporting uses to be at the forefront. Lichfield is going to be the first of what we hope will be a reinvention of spaces across the UK.”

Director Neil Morten, who lives in Lichfield, says the project has already generated interest from families ahead of its opening, planned for September, with more than 1000 people registering expressions of interest in advance.

He said: “The opening of the Swim House is the first of its kind nationwide. We will be providing top-class coaching for all levels of ability, from helping with a baby’s first experience, to learning to swim and advancing elite athletes.

“We have been overwhelmed by the interest from the local community already, even though we are still waiting to open the doors to the public.

“The facility will provide primary school water time every week, benefiting residents and local schools. We are finding that local businesses and organisations see this project as an excellent addition to the city and are delighted to be involved.

“The proposal will deliver access to pool time for young people, while also helping, we hope, elite athletes on their journey to gold.”

Work is expected to start shortly to prepare the facilities. Lichfield District Council approved a planning application for the change of usage in January.

New bar and mini-golf experience to open in Rugby