Gymshark’s co-founder Ben Francis is to become chief executive of the fitness fashion phenomenon again, four years after stepping back from leading the company.

Gymshark, which had sales below £13m in 2016, generated £30m profits on sales of £260m in its last financial year, to July 2020, as its extraordinary growth trajectory showed no signs of slowing.

Last August Gymshark achieved unicorn status – the label given to private businesses with a valuation of more than $1bn – after selling a 21% stake in the business to American investor General Atlantic for $300m.

It was an incredible milestone for the business which was started in 2012 when Francis and his co-founders were students.

Francis, who only turned 29 in June, said: “My vision for the future of Gymshark has never been more clear. We have a once in a generation chance to create a brand that is genuinely is one of the greatest brands in the world.”

The leadership transition has been in the planning since before the start of the pandemic, with Francis becoming much more public facing once more, notably during the General Atlantic deal.

Francis said: “A couple of years ago when we went on a trip in Hong Kong, me and Steve had a long conversation about the future of the business, where we want it to go, and ultimately the right type of leader to take it to that place.

“I’m not gonna lie, I was fairly surprised at the time because Steve said that he genuinely didn’t think that he was the right person to take Gymshark to the next level.

“The thing that really surprised me is that he said that he thought that I was the right person to take it to the next level.”

Hewitt added: “I think we’re just at the start of the journey. My job, exec president, really focuses on my strengths. It’s all about people, but also all about scaling the organisation commercially. I literally can’t wait.” 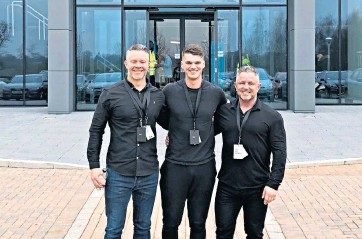 The platform for Gymshark’s global ambitions has been laid by Hewitt and executive chairman Paul Richardson, who joined during a difficult period for the business six years ago. An overwhelming Black Friday and customer service issues were symptomatic of a fitness brand that was trying to run before it could walk.

The appointments were transformational for Gymshark – Francis has previously said the duo “completely and utterly revolutionised the business” – and within another three years sales had broken £100m and pre-tax profits had soared to £18m.

“Looking back, that seems a very obvious decision to make,” said Francis. “And to be fair, I received a lot of credit in terms of bringing those people on, removing myself from the chief exec role and Steve coming in and really managing the day-to-day in the business.

“Ultimately my gut instinct told me that was the right thing to do because it would help develop and grow the business and the brand.

“It would allow me to focus on what I’m really good at but also allow me to learn in the areas that I’m not good at.”

Hewitt and Richardson allowed Francis to step out of the limelight – at least externally – and when Gymshark launched its Solihull headquarters in April 2018, Francis spoke only briefly to the assembled staff.

Francis has been Gymshark’s chief product officer but last month Danielle Petesic was appointed to that role, overseeing a team of 130 people.

Francis said: “I’m well aware of the fact that I’ve got so much more yet to learn, but equally I do feel like everything has led me to this point has put me in such an amazing position to do this role.

“I’ve worked in so many different facets of the business, I really think I’m in an amazing position now where I can amalgamate all of that knowledge, experience and expertise, and hopefully be the person that can really help to lead Gymshark to this next level.”

Australian businesses invest £28.5bn to level up the UK

Gold Coast is being kept safe by anti-terrorist bollard manufacturer

Free Trade Agreement with India could boost region by £297m