October’s fuel cap price increase – if implemented – would result in a safety risk for motorists as around one in five say they plan to cut back on car maintenance.

September’s Startline Used Car Tracker shows that 77% believe the rise in gas and electricity prices would impact on whether they can afford their car with 18% putting off replacing tyres and 22% delaying having their vehicle serviced.

Paul Burgess, CEO at Startline Motor Finance, said: “The research shows the huge pressure that the fuel cap increase would bring to bear on personal finances, and how it is likely to affect whether people can afford to simply keep their cars safe.

“Routine maintenance and replacing worn tyres are basics when it comes to making sure your car is fit to use on a day-to-day basis – for you and other road users.”

Other measures that those questioned would adopt to cut motoring costs include shopping around for cheaper fuel (47%), using their car less (42%), swapping their car for one that is more economical to run (34%) and finding a cheaper place to have their car serviced (12%).

Paul added: “Petrol and diesel prices are starting to fall, so there is an opportunity to make savings there but it is really interesting that more than a third of people are looking to change their car for one with lower costs. That suggests we could see increased activity in the used car sector in the final quarter of the year. Also, if people plan to move into more economical cars, higher demand will inevitably drive up the price for these vehicles.”

Despite the worsening cost of living crisis, Startline’s September research suggests the used car market remains in a relatively stable position. When asked whether used cars were more attractive purchases than new, 73% of people agreed, while the number of people who say they are likely to buy a used car remains high at 63%. The level of responses to both of these questions has barely changed over the last quarter.

However, there are some indications that the impact on personal finances is already having an effect. While a relatively small proportion of respondents – just 7% – believe that used cars have become more unattractive purchases, 71% of those people say that used car prices are a concern compared to 14% who were asked the same question in July.

Paul said: “The used car sector remains buoyant and has been remarkably resistant to falls in consumer confidence over the last few months. Much of this is down to the fact that vehicles remain in such short supply, with demand still strong in most parts of the market.

“Despite this positive picture, there are some signs that a group of people are beginning to be priced out of the market, with growing concern among a small minority about pricing. For most of this year, used car prices have been pretty stable and even fallen slightly, so the obvious conclusion is that they are simply no longer in a position to buy because their personal finances have worsened.”

There are also some interesting findings when it comes to the fuel choices people might consider when choosing a used car. Over the last quarter, there has been a marked increase in those who trust petrol and diesel technology – from 44% to 52% – and a decrease in those saying electric cars are too expensive – from 49% to 38%.

Paul concluded: “There are a couple of different trends here. One is that petrol and diesel potentially look like a safe haven for people who feel that their personal finances are under threat. They are tried and trusted. The other is that the increase in fuel prices that we have seen this year might have caused people to rethink the economics of electric cars. Although they are expensive to buy, charging and maintaining them can be very cost-effective.” 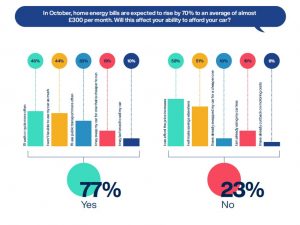 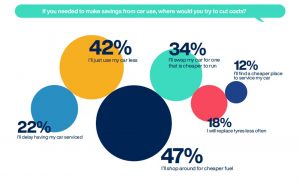 The Startline Used Car Tracker is compiled for Startline Motor Finance by APD Global Research, well-known in the motor industry for their business intelligence reporting and customer experience programs. This month, 300 consumers and 55 dealers were questioned.

Founded nine years ago, Startline is a flexible motor finance specialist and employs 170 people at its Glasgow headquarters. It works with around half of the UK’s top 50 franchise dealers by turnover as well as 70% of the top 50 independent car retailers, and currently accounts for more than 2% of the UK used car motor finance sector by volume.

How businesses can focus on investment in renewables

Updating HR processes: the importance of employee and manager self...