A thirst for a fresh challenge prompted former Royal Air Force aircraft welder Ray Woolhead and his wife Rachel to launch their own gin making business in West Yorkshire.

The pair met while they were both still working in the RAF – Rachel Woolhead was an aircraft refueller.

After leaving the military Ray worked for Formula One Teams, then switched to managerial posts in the energy efficiency industry. Rachel became a dispensing optician.

But Ray said they decided to radically change direction again after he happened to hear about someone else’s success in setting up a gin distillery.

The couple founded Divine Gin, in Holmfirth, in 2014. It produces a London dry gin, as well as a raspberry infused gin.

“When we were looking into starting the business the gin craze hadn’t kicked off at that stage, so we had to teach ourselves about it,” Ray said.

“There was such a lot to learn about licensing and regulations, so we didn’t rush things. We took our time delivering the spirit. And putting together the brand was the hard part. 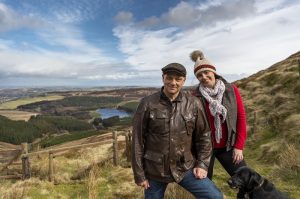 “If you don’t come from this industry background you have to work out where to begin from.

“We started off by trading locally, then realised we needed to jump onto the gin festival bandwagon – we’ve been doing that for about two years now.

“That’s how you get the word out to more people, and establish a presence for yourself.

“We find that the younger end of the market at first tends to go for sweeter, more sugary gins.

“But they don’t want that forever – over time they ‘refine’ their tastes! Everyone’s palate is different, so we do try to cover different tastes.”

Ray said one of the company’s biggest challenges is the current saturation of the market, with a huge number of gins competing for the demand.

And of course over the last few weeks, in common with the rest of the industry, he and Rachel have had to contend with the COVID-19 pandemic.

“Our sales have dropped by over 70%,” he said. “Bars stopped ordering, everything just stopped almost overnight, though we have seen a bit of an upturn with internet sales.”

The couple have currently halted gin production, but their distillery has switched to making hand sanitiser to order for other companies.

It recently produced a 70 litre batch which was given free of charge to Kirklees Council and key workers in a local Coop store.

Ray said he and Rachel aim to triple production and target major retailers when the situation begin to return to normal.

He added: “We’ve been doing online gin tastings and have put up videos on Youtube – it’s important for us to continue to be seen.

“Once things re-open we’ll be marketing ourselves, but so much will depend on how the market recovers and when people will be able to return to pubs and restaurants.

“We’re lucky in that we did do some quite large distillations just before the lockdown, so we can be very reactive as soon as we come out of the other side.

“We’ve invested everything back into the company and it’s in a reasonable financial position to ride things out. But we’re grateful for every single bottle we sell.”