“We’re going to have to be creative and entrepreneurial”

“A global pandemic was never in the job description,” begins James Mason, chief executive of Welcome to Yorkshire.

He says this as we sit down to talk about the recovery plan which the tourism body has just launched, in order to support the county’s £9bn visitor economy.

It’s easy to forget that Mason is still fairly new into the role having taken on the job earlier this year after what he describes as a “very difficult 12-18 months” for the organisation, which saw a very public inquisition into how it operated and his predecessor.

With all this in mind it’s clear that Mason was brought in as he describes it “to look at how we could reshape the organisation”, and to get the house in order.

“We were well on our way” he continued, referring to the changes to structure and governance at the body which includes the hosting of board meetings in public.

“I wanted a year under the radar, where I could really get under the bonnet.” But that wasn’t meant to be and instead of enjoying the array of events the region has to offer the former journalist and chief operating officer of Bradford City FC is sitting at the head of an industry in crisis.

“The pandemic has really sharpened our focus in the last few weeks and months.” As an industry, he admits that although Welcome to Yorkshire championed and celebrated the tourism sector, he’s conscious that it largely took care of itself year after year. That was until now!

“All of a sudden we realised that we have to go from that celebratory body to a body that really gets its fingers dirty with national MPs, with government, Visit Britain and beyond.”

Like many this transition had to happen almost overnight. On becoming a lobbying body Mason says it’s not an area that necessarily felt comfortable for the organisation, but admits that it was a role some felt they should be doing. He emphasised that with, Peter Box’s (chair of Welcome to Yorkshire) strong background within local government and politics it was “where our value was [at this moment]”. However whether this will continue in the future he doesn’t know. I find it hard to imagine this role

But Mason is keen to highlight that the lobbying role is not just about Yorkshire, it’s about tourism’s contribution to the UK economy. He added, ” I think if we do lose the many bed and breakfasts, the wonderful visitor attractions, national heritage sites and theatres etc. we will be so much worse off as a country. And actually, our UK plc offer to the rest of the world becomes so much weaker.”

As we talk about the difficulties businesses in the sector face, he pointed out that although the support that has been made available by Government, such as furlough, is welcome it isn’t sustainable.

“My concern would be businesses will enjoy furlough for as long as they can. But when they’re forced back into employing people or buying stock they may take the decision to fold, and that could be catastrophic. Because it means a business goes from contributing to the economy via employment, business rates and the supply chain, to a consumer of the state, i.e. unemployment benefit etc.”

“Do I know all the numbers? No, I don’t, but I’m almost certain that the loss of all the businesses [in the sector] will come at a greater cost [to the economy] than the investment in keeping them alive for the foreseeable future giving them a chance to trade out of this, as opposed to having to give up.”

It is this talk of investment which sees conversation turn to the entrepreneurial, colaborative and agile responses which many businesses have made through this crisis and Mason highlights Welcome to Yorkshire is looking to do the same.

At the start of lockdown, it launched the “Book it, Buy it, Bank it” scheme which has now evolved into a Yorkshire wide gift card. The scheme which is free for businesses to sign up to aims, according to Mason, to “tap into that diaspora of people all across the world that have got connections back in Yorkshire.” He talks globally because he can point to data that shows these sort of products are “generally bought by people not from the area. Although he also admits, the pandemic creates an opportunity to focus on getting the message right closer to home – as foreign visitors may not be back for sometime. 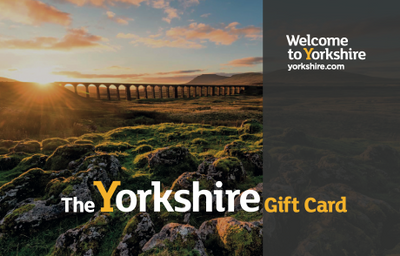 Mason is keen to emphasise however that this new gift card is not designed as a money maker for Welcome to Yorkshire but as a way to fuel the economy. “The best way to describe it is that £50 bought on the card, means £50 spent in Yorkshire.”

This obviously leads to a key question though. If Welcome to Yorkshire, in its current guise is significantly funded by local authorities and local authorities are reporting potential significant overspends as a result of the crisis – e.g. Leeds states c. £200m, Doncaster £18m – what is the future of the organisation and how can the funding be justified from a local government perspective?

“We really sympathise with our local authority partners and actually we’ve got to work shoulder to shoulder with them more than we ever have done before. Principally, they are funding us right now and have done for a considerable period of time. Yes, we’ve got considerable private sector income as well but Covid-19 has put a stop to that naturally.

“So the way I approach this now is we’re going to have to be creative. We’re going have to be really entrepreneurial.

“One plan going forward is to do a personal membership, which again, Welcome to Yorkshire has never done. But with five and a half million people in the county, millions more across the UK and hundreds of millions across the world with a connection to Yorkshire, there’s an opportunity.”

He explains plans to develop a membership product at a £10 or £20 price, likening it a crowdfunding model, “whereby we go after small increments on a large scale”. This might sound crazy but he adds it brings an additional opportunity to “actually, start conversation with people, getting them on a customer journey with us.”

The ultimate aim of this and other ideas for new income streams according to Mason is to bring in money which the organisation can then redistribute around the county. “Ultimately we’re not for profit, but we need to operate like a private sector organisation” he concludes.

So, does this pandemic provide an opportunity for the body, which has some significant success in its past but has recently slightly tarnished its legacy, start a fresh? Well Mason says yes.

“It’s an opportunity to recalibrate. I’ve been really lucky in my career to, you know, sometimes inherit, some great positions or a strong brand to take forward. But you still also have to introduce new ideas and, put your own style of leadership onto it. In this instance, I’m coming into a, really crestfallen battered and bruised organisation.”

A “battered and bruised” organisation it may be, but for Mason he feels bound to support and encourage the team – which he says have had a torrid time, respect that the organisation (right now) is funded by public money, and keep an eye on the future in the hope of stealing a march on the rest of the UK and global tourism sector.

On the future, he admits he never came into the role to fight a pandemic and that, right now they have to “fight hard” and “dig deep”, but “we’ve got to be as ambitious as we’ve always been”. And as far as ambitions go, Mason wants to bring American sports such as ice hockey, baseball, basketball and even American Football to the county.

“And to those who think I’m crackers, who’d have thought the Tour De France would start in Yorkshire.”

So, although the tourism and leisure sector is certain to face a very difficult period and there will be some casualties. Mason appears to be a man ready for the challenge of getting the £9bn sector back after one of the greatest challenges it has faced in recent years.