Investment company Aviva has announced plans to close one of its offices in York as part of a corporate move that will see more staff work from home beyond the pandemic. 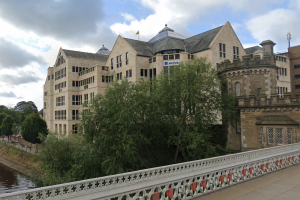 Aviva’s York city centre office on Wellington Row, which will become the firms sole site in the city

According to plans, the firm which employs over 2,000 people in the city, would close its Monks Cross site but retain the city centre office on Wellington Row. The consolidation is expected to be complete by 31 March

The move comes as the business states the way its uses its office space “is changing significantly”.

Despite the planned office closures which will impact sites across the country the firm has claimed there are no plans for job losses in York.

A spokesperson for Aviva said: “We remain committed to York as a key location. This change will allow us to continue to maintain our existing people capacity under our new ways of working, consolidating into one office in the city centre.”

It was added that they will be looking for a third-party occupier for its Monks Cross office “as quickly as possible”.

Commenting on the wider programme of site closures the firm said: “Our intention is to invest in our sites to provide a more vibrant, inspiring and flexible workspace for our people.

“As a result, we are making changes to a number of our offices across the UK, which means we are combining office space in some locations and reducing the space in others.

“We are not leaving any town or city where we currently have a presence and we will have an office in: Birmingham, Bristol, Eastleigh, Edinburgh, Glasgow, Leatherhead, Leeds, London, Manchester, Norwich, Perth, Sheffield, Worthing and York.”