Over 100 business leaders from across the North and the Midlands have warned of the impact of not delivering HS2 in full.

In a letter sent to the Prime Minister, signatories stated failing to deliver the multi billion pound scheme would be “a massive missed opportunity to create hundreds of thousands of jobs, attract major investment and stimulate huge economic growth to create a more balanced, fairer economy”. Adding that it would also leave “your flagship levelling up ambition in tatters.”

Although signatories were heartened by the progress made on the Western leg they believe commitment to the Eastern leg is “less apparent”. Adding that the delivery in the East could create 150,000 additional jobs in in Leeds City Region, Sheffield City Region and the East Midlands region.

The letter also warned that each year of delay costs the regions £4.9bn in growth. 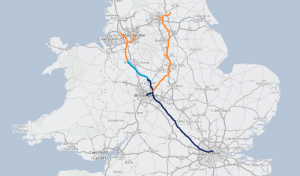 Adding “These transformational regeneration and growth opportunities do not come along very often. Major investment in infrastructure, which the North and Midlands have not seen since the Victorian era but has been delivered in London and the South East, would be the catalyst for a North as prosperous as London; the Midlands rivalling the South East for productivity and job creation.”

With leaders ending the letter: “Businesses in the North and the Midlands stand ready to capitalise on the opportunities an integrated high speed network would provide and help rebuild the economy.”

Signatories of the letter the Northern Powerhouse Partnership, one of the partners of the upcoming virtual conference Invest North. This one day event is bringing together business and policy leaders from across the region to set the agenda for the North’s economic future, find out more and book your tickets here.

Film company grapples with a new topic in latest project