Approval given for hundreds more apartments in city centre

Plans to build a major new residential development consisting of 345 apartments for the private rented sector (PRS) in Leeds city centre have been given the go-ahead.

The scheme, by York based development company S Harrison, will see four buildings, ranging from seven to nine storeys, built on two parcels of vacant land between East Street and Ellerby Road.

Revised proposals for the project were considered by members of Leeds City Council’s City Plans Panel earlier this afternoon. Councillors unanimously voted in favour of the plans. 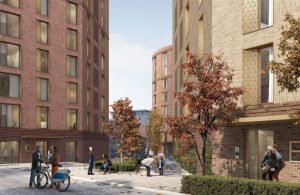 Designed by Leeds architecture practice Carey Jones Chapman Tolcher, the development will offer a range of one, two and three bedroom apartments, complete with car parking and cycle storage facilities, as well as residents’ facilities and commercial space.

After the planning decision was deferred last October, S Harrison made modifications to the development, including more than doubling the number of affordable homes in the scheme and increasing the number of electric vehicle (EV) charging points.

A widened pedestrian footpath will run along East Street including a redirected cycleway.

There will also be a green central courtyard, in addition to public open space complete with 41 new trees and a landscaped public right of way.

Gavin Douglas, from S Harrison, said: “We have worked closely with planning officers on the design of this scheme for several years, as well as hosting presentations with Leeds Civic Trust, public groups and the neighbouring St Saviour’s Church.

“We have listened to the comments of members and created a high-quality development that fits with the site’s surroundings and complements the extensive regeneration that has taken place nearby.

“The scheme is specifically designed to frame the view of the Grade I listed St Saviour’s Church from East Street and will be formed around a central courtyard and amenity space. 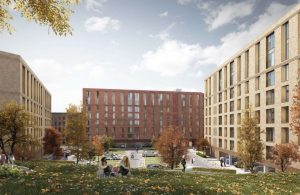 “It will offer a wide mix of apartments, including three bedroom homes that will appeal to families and those wanting to share an apartment, as well as improving pedestrian access around the site. A new pedestrian crossing on East Street will also significantly benefit this part of Leeds.

“Crucially, it will also form the final phase of regeneration that has transformed this part of East Street in recent years, on a brownfield site that has been allocated for residential development in the Aire Valley Leeds Area Action Plan for many years.”

Douglas added: “Our company has considerable experience in developing well designed, popular residential schemes throughout Yorkshire and beyond, ranging from smart apartments and affordable homes through to luxurious family houses.

“When this is combined with our background in construction, it means we understand how to viably deliver affordable homes on challenging sites.

“As a result, we have always had plenty of confidence in this location, which has benefited from major investment and become a popular residential area in recent years, as well as being within easy walking distance of all Leeds city centre’s amenities.”