Estate agent Dacre, Son & Hartley’s new homes division has been appointed to market apartments in a new homes development within a landmark building in Heaton, Bradford.

Work is now underway on transforming the Grade II Listed former Hallmark House building – which until recently was the home of Hallmark Cards – into 144 studio, one and two-bedroom apartments, including 16 roof top penthouses, named as “Card House”.

Investment and development company, The Investment Room, is also building another 240 apartments within the grounds of the building, which span more than three acres. 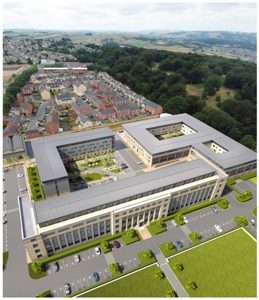 Steven Potts, area director at Dacre, Son & Hartley, said: “Card House is the largest and most exclusive residential development currently under construction in Bradford and will see this stunning art-deco building transformed into a selection of grand apartments.

The original building dates back to 1937 and was designed by Bradford-based architects Benjamin Chippindale and Richard J Edmondson.

It was originally a printing works and offices for WN Sharpe Ltd, which was acquired by Hallmark Cards in 1984 and became the greeting card company’s headquarters before it relocated to Dudley Hill.

Spades in the ground at £350m mixed use development

Troubled council sells off Yorkshire asset to aid its financial...