The Spirit of Yorkshire – Yorkshire first single malt whisky distillery based in Hunmanby saw eight of its Filey Bay whiskies awarded accolades including three silver and five bronze medals, while Drapers received a silver medal for the second year running for its Pink Gin and was recognised as amongst the best in the world from a pool of over 1,200 gins.

Silver medal winning spirits are typically described as ‘An accomplished spirit with good balance, strong character and good complexity. A classic example of its style or variety’, with both businesses delighted with the recognition. 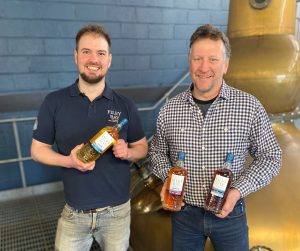 Joe Clark and David Thompson of Spirit of Yorkshire

Spirit of Yorkshire’s Whisky Director, Joe Clark said: ‘The IWSC is judged by 85 experienced sommeliers, distillers, vintners and distributors. These medals are great accolades and a timely reminder of why we’re doing what we’re doing: making world-class field to bottle whisky using 100% home grown barley, here on the Yorkshire Coast.

“Only eight of the 33 English single malt whisky distilleries were awarded medals and Filey Bay whiskies won eight out of the 22 medals that were awarded to English whiskies in the Worldwide Whisky category. As a young distillery with whisky that’s just five years old, we’re very pleased with the results.”

Drapers co-founder Matthew Wignall, a former bespoke tailor has always aimed to bring the same artistic approach to the spirits as the clothes he has designed, weaving layers of aromatic botanicals into each small batch and designing the packaging to tie into the latest fabric trends.

His co-founder Jamila Juma-Ware added: “With three medals and two years’ of back to back IWSC wins, the announcement of the 90-point silver award, is a huge moment for us, it proves the consistency and attention to detail which underpin our craft, we are humbled, and utterly delighted.”

To find out more about the array of spirits produced in the region including a rum and tequila click here.

Independent restaurant to offer another casual dining option in city...

Pret A Manger coming to city shopping centre this summer