Becky Maguire, head of tax at Azets in Yorkshire shares her view of the 2022 Spring Statement and looks a little more at the Chancellor’s Tax Plan.

Yesterday’s Spring Statement was one of the shortest in recent years and not surprisingly that resulted in relatively few announcements. As predicted, against the current challenging international backdrop and rising inflation, the Chancellor’s speech urged caution and restraint now with the reward of lower taxes to come. But that will do nothing to support SMEs who are right now facing unprecedented and wide-ranging cost pressures and a skills gap and many will be left frustrated by the promise of future help when the need is now.

The immediate measures focused on helping households and working families. The £3k increase in the National Insurance threshold from July which will be aligned with the income tax threshold is welcome. It will soften the impact of the health and social care levy for 70% of households and along with a 5p reduction in fuel duty give some much needed immediate support. However, those calling for a windfall tax on energy companies to help low income families dealing with fuel poverty will feel this doesn’t go far enough.

For SME businesses, the light is still at the end of the tunnel with the government’s Tax Plan released today promising to cut and reform taxes on capital investment and R&D but only in the future.

The aim here is to improve productivity in the UK by incentivising investment. The super-deduction announced in March 2021 is a temporary enhanced capital allowance giving businesses 130% tax relief for their expenditure on Plant & Machinery. The government has recognised that once this relief ends in March 2023, the UK will be lagging behind the G7. The Tax Plan includes some illustrations of changes that could be made in the Autumn including:

The Tax Plan also suggests a possible move to full expensing of certain capital investment or a combination of a range of the measures noted above.

My view would be that simplicity and certainty should be prioritised.  A super deduction adds complexity to the tax code and whilst generous would presumably have a limited time frame.  A more certain long term first year allowance combined with a permanent enhanced Annual Investment Allowance would be simpler to administer and give businesses the certainty they need to make long term decisions.  I would also like to see some further enhanced measures for green investments to encourage sustainable choices.

The Tax Plan also sets out how the tax system can encourage more spending on R&D recognising that the current R&D tax relief system does not appear to have seen the desired increase in R&D spending. 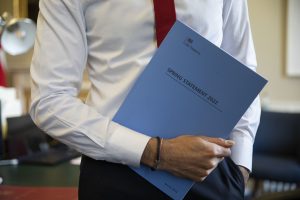 The Spring Statement confirmed the intention for cloud costs to be included in the R&D reliefs from April 2023 – welcome news for many businesses in our region along with a new announcement to include R&D underpinned by pure mathematics.

The large company RDEC scheme may also become more generous. However mention of the SME scheme was limited to noting that its impact is less meaningful in encouraging investment and the scheme is more open to abuse. Little good news there for SMEs and it has been speculated that the SME regime may be integrated into the RDEC, possibly reducing its value.

This part of the Tax Plan also mentions the recent review of the Enterprise Management Incentive (EMI) share scheme noting that the government has concluded it is effective and appropriately targeted.

The third focus of the Tax Plan on sharing the proceeds of growth with working people contained one of the Chancellor’s key announcements – a commitment to cut the basic rate of income tax from 20% to 19% in 2024. This depends on fiscal principles being met but its timing, at the end of the current Parliament is politically well judged.

Overall many will conclude that this Statement was not the bold platform for growth that the Chancellor may have wished to present – and perhaps we will see that boldness in the Autumn Budget. In the meantime both businesses and households will need to ride out the challenges of the coming months and hope that future tax reliefs and the growth it stimulates are enough.