Early stage proposals have been brought forward to build 130 homes on a vacant, former industrial site in Kirkstall Road, Leeds.

The pre-application plans from Your Housing Group (YHG) for the former Thyssen Krupp site, at 177 Kirkstall Road, were presented to members of the Leeds City Plans Panel.

They include proposals for 87 apartments, 43 houses along with public green space, landscaping and 78 car park spaces.

Credit: Your Housing Group. Subject to change during planning process.

Councillors were told the land earmarked for the development is a 1.47 hectare brownfield site on the corner of Kirkstall Road and Viaduct Road. It was previously occupied by Thyssen Krupp who left the site following the December 2015 floods.

The site has previously been approved for the development of up to 272 flats, with 136 parking spaces, associated infrastructure and ancillary uses. This application was “finally disposed of” on 24 September 2020 due to lack of progress on a section 106 agreement. 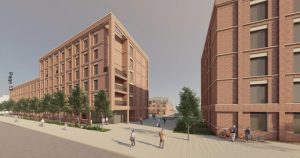 Credit: Your Housing Group. Subject to change during planning process.

The report presented to councillors notes: “The emerging proposals offer a significant potential to regenerate a prominently located brownfield city centre site which has been vacant and underutilised for a number of years.

“The development also offers the opportunity to provide new public realm and greenspace and facilitates pedestrian routes and future access through the site.”

Your Housing Group (YHG) is one of the largest providers of affordable housing in the UK, managing over 27,000 homes across the North-West, Yorkshire and the Midlands.

Green light given for speculative industrial and logistics development

Construction starts on more than 100 homes at brownfield site