Harvey Nicholls in Leeds starts its festive season on November 16, when its Fourth Floor Brasserie launches its Christmas menus.

Three course meals at the restaurant start at £35 for a set menu, with upgrades for prosecco or champagne, and a choice of traditional and non-traditional menus. 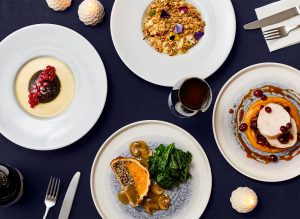 Traditional options on the set menu include include chicken and herb terrine with piccalilli and chicken liver parfait tart alongside crispy kale, and turkey breast with dauphinoise potato, Brussels sprouts, chestnut, and confit turkey leg ragout.

For a less traditional option diners can choose pan-fried sea bass with pak choi, and herb hash brown in a curried mussel broth.

A la carte options include tuna carpaccio with soya, carrot, and sesame seed tuile, and hearty winter warmers such as beef fillet or pan-fried venison with mushroom bread and butter pudding.

The restaurant will be hosting Santa at three festive Sunday family breakfasts on December 4, 11 and 18.

And on New Year’s Eve the brasserie will usher in the New Year with a five-course tasting menu for £75 and drink pairing for an additional £25.

Pub comfort foods will be on the menu at new restaurant

Sushi bar on a roll in Doncaster