A pair of Nottingham design specialists have revealed an idea to transform the derelict former Broadmarsh shopping centre site by covering it in illumimated cladding.

Daniel Lacey, director of DL Design Studio, and Christina Pieri, a lecturer in architecture, have produced a concept that they say will reflect the mood of the city while temporarily hiding the semi-demolished Broadmarsh mall. 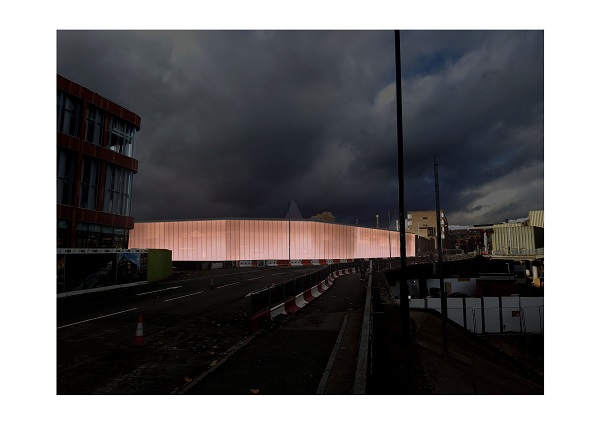 How ‘FEEL’ would look

Lacey told TheBusinessDesk.com: “Our idea is to clad the remains of the Broadmarsh centre with a translucent cladding, behind which lighting would be installed. The lighting would then be linked to an app which city users and residents could download and use, answering a simple question ‘How are you feeling?. There will be a sliding scale from awesome to miserable. The responses would then be securely fed into the lighting system which would change colour depending on the average mood at any given time. We’d simply title this installation ‘FEEL’.”

Lacey says that according to Nottingham Insight Online, the city is the 11th most deprived area out of 317 districts in England. Worse still, it has the sixth highest rate of children under the age of 15 living in a deprived household, and the second highest of all core cities.

He added: “It’s our opinion that the success of Nottingham should be measured on the mental health and wellbeing of its inhabitants.”

Pieri said: “We think an interactive installation which engages all demographics whilst providing a temporary visual respite to the ever-lingering reminder of the failed Broadmarsh Centre project would at least provide a sense of inclusion for the people and humility for the authority.

“Our scheme is not endorsed by the local authority or any government body, it’s purely a dream which we wish to share.”

Last Friday, Influence Landscape Architects and the Nottinghamshire Wildlife Trust unveiled a vision for the Broadmarsh site that would include 100% natural greenspace – which it says will be the start of a big idea to reconnect the city to Sherwood Forest and invoke the spirit of Robin Hood – bringing wildlife to “nature-poor city dwellers” and the millions of visitors it attracts every year.

The redevelopment on the Broadmarsh shopping centre ground to a halt earlier this year when intu collapsed into administration.