What began as a joke Twitter account has now grown into a £1m turnover business for Steph Johnson.

Her ‘Scouse Bird’ Twitter account was in response to the reality TV series, ‘Desperate Scousewives’, which was being broadcast at the time.

Now, eight years on, Steph runs social media accounts and a shop promoting a range of products, and is planning further expansion.

She explained the, at time tortuous, journey to her £1m-turnover venture: “I started it all off in my late 20s, and then it was just a bit of fun really, genuinely, and I had no idea where it would take me.

“Blogging and influencing didn’t exist then so there was no expectation of making money from it. I was dirt poor as well, and lived in a two-up-two down in Walton that I’d bought aged 20.

“I couldn’t live on my wages really either, so I was always in debt. It was a tough time. But I kept at it and didn’t give up, and built up a social media following, staying anonymous like many others.

“Then I gradually started making a little bit of money the year after, in 2013, when I started doing the Scouse Bird diaries. I left my job late 2013 after 18 months of running the SBP socials to do it full time, but my main income was still from advertising other businesses, not actually my own.

“But I was learning loads about how to do it from that, and the online shop launched in 2014. So now, reaching £1m of turnover, it’s really a special moment for me and my team.”

With everything on sale from her own brand of gin to Spanish cleaning products, through to her famous diary and F*** the Tories ranges, the entrepreneurial Steph has built her brand partly around having a shop, and branded and independent products, a different path to many other influencers.

She revealed that the physical shop was not even initially planned: “In 2016 when my 250k follower Instagram page got reported and taken down I had to pivot to the online shop more as Insta had been my main source of income.

“I was 8½ months pregnant and the only breadwinner. Quite stressful to say the least, being ready to pop.”

Then in 2017 disaster struck, though Steph was still able to turn a huge challenge into a very positive outcome: “It was when my Facebook page got hacked I had to start all over again, which, at first, was devastating and so stressful as I had built up 180k followers. But I also took a big risk and stopped being anonymous as well.

“I knew it would create a bit of a stir as most influencers like me don’t show who they are – and that is great, of course. But for me, finally there was a face to what I was doing – my face.

“That enabled me to open my first physical shop – it was a huge turning point, and I felt then much more like a businesswoman with a thriving brand and I could own it and myself more.

“It was actually a massive turning point for me, looking back. Then six months later I moved to a bigger unit and opened a salon as part of the shop, and my social media following kept growing, too.” 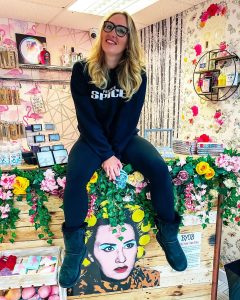 Eighteen months later she moved to a high street location in Crosby where her business remains, delivering right across the UK – and now there are plans to move to Liverpool’s city centre in the new year.

Steph said: “2020 has been crazy and very difficult for everyone. The pandemic has changed everything. I have slowed myself down a lot and had time to reflect on my life, and take stock, for which there was never time to do before.

“And from that I have had the head space to set myself some new goals, including moving location, which is definitely a new challenge for me and the team.”

She said: “My philosophy is always to keep things fun, always have integrity. Be persistent, be consistent in life and use whatever bricks people throw at you to build your empire stronger.

“There’s always a way to turn a bad situation into a positive, and that is kind of how I have grown in life and as a businesswoman. Also, I always try to be as diverse as possible.

“The shop isn’t my only source of income – I host a quiz night, have an Airbnb, do the affiliate work. I think if you can keep your life busy, then you have got a good chance of succeeding – but also, don’t ever let anyone bring you down, use their negativity to be even stronger each and every time.

“That’s a big part of being a Scouse Bird.”

Farming and finance group overcomes turbulent times to return to...

Family business to double in size after relocation to new HQ