Council officers recommended approval for a 135-apartment 16-storey scheme, known as Voyager, close to the city’s waterfront on Waterloo Road and the Liverpool Waters and Ten Streets development zones.

The applicant is Waterloo Road, and the architect is LAG Pritchard Architects.

It involves the demolition of a Greek Taverna, which was the site of famous dock road eaterie, Frank’s Cafe, “where tea was served in pint pots”, said architect Jonathon Prichard in his address to councillors.

Frank’s was also the breakfast diner of choice of former Tory Party deputy chairman Jeffrey Archer who always insisted on a Frank fry-up on his visits to the city.

The scheme, built primarily in brick around a steel frame in sympathy with nearby warehousing now converted to flats, proposes a 13th-floor roof garden for residents.

Mr Pritchard said it is “a sustainable building for the future, reflecting the past”, and he reassured councillors the scheme was not dependent on the controversial ‘fractional sales’ model.

However, Cllr Joe Hanson, representing the nearby Kirkdale ward, objected to the plans on the grounds of only 20 car parking spaces being available for 135 apartments, claiming the scheme’s residents could cause traffic congestion problems for nearby neighbours.

When committee chair, Cllr Tricia O’Brien, compared them with the residents of New York who have become used to not owning cars in built-up residential areas, Cllr Hanson retorted: “It’s fine to say it’s alright for New York, but it’s not alright for Kirkdale. The Kirkdale area gets the full weight of this. People are parking all over the estates.”

However, the application was approved by four votes to two, with one abstention.

Another scheme to win approval was the city centre site of Chicago Buildings, once home to the Wade Smith clothing store, considered an icon among Liverpool fashionistas of the 80s and 90s.

The Whitechapel store, situated on the upper floors of the building, was the hottest location for the latest trainers and ‘athleisure’ wear among teenagers. 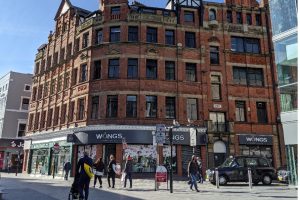 It was said that when Tatler’s eccentric fashion doyenne, Isabella Blow, so famously hailed Liverpool as the Capital of Cool, Wade Smith was at the centre of her adoration.

Now, the only commercial units are on the ground floor, a Holland & Barrett health foods store and Wongs Jewellers.

The applicant, Sara and Hossein Asset Holdings, wants to transform the upper floors and part of the lower ground floor of the five-story building into 13 one-bedroom apartments, six two-bedroom apartments and five studios, as well as a residents’ gym.

Chicago Buildings sits within the Castle Street conservation area, but the plans have raised no objections as the proposed change of use will preserve the area’s character and appearance.

Councillors voted unanimously in favour of the proposals.

The proposed scheme has been designed by Liverpool-based architectural design firm, ArchiPhonic, whose co-director, Adam Mokhtar, said: “The Chicago Buildings are a part of our city’s heritage, known not only for being home to the former Blacks’ store, but also being the location of Hessy’s Music Centre, where The Beatles once bought their instruments.

“Our plans focus on maintaining this heritage, while also ensuring a positive end-user experience, offering a bigger mix of unit types, better circulation and far more natural light, as a result of the number of windows included in the scheme.”

Israeli property group snaps up No.8 First Street for £82m