H&H Land & Estates is bringing to market a property in the Lake District valley that was the inspiration behind popular children’s character, Postman Pat’s fictional home of Greendale.

Ubarrow Hall, in Longsleddale Valley, is a charming 17th century farmhouse and original Grade II-listed 15th century Pele Tower, with 17 acres of land and a range of traditional buildings, being sold by Private Treaty through the firm’s Kendal office, with a guide price of £975,000.

A Pele Tower, also spelt Peel, was a small fortified keep or tower house, built along the English and Scottish borders in the Scottish Marches and North of England, mainly between the mid-14th century and about 1600.

H&H says this is a ring-fenced lifestyle or equestrian property which also offers opportunity for home working, peace and tranquillity and the potential for alternative use or development subject to the necessary permissions and consents.

Colin Tomlinson, managing director with H&H Land & Estates, said: “Lake District properties with this much charm and history rarely come to the market – add to that 17 acres of pasture and meadow land, as well as several outbuilding, this is a property which we would anticipate attracting considerable interest.

“The farmhouse is absolutely charming and comes with a vibrant history, the 15th century Pele Tower is understood to be one of the oldest buildings in the Longlesddale Valley.

“Pele Towers were originally built for defence purposes and as watchtowers. Thankfully, they are no longer needed for their original intent, and Ubarrow Hall’s Pele Tower has been cleverly repurposed to provide further accommodation space.”

Ubarrow Hall Farmhouse and Pele Tower have been very well cared for and maintained and are surrounded by a delightful mature cottage garden. 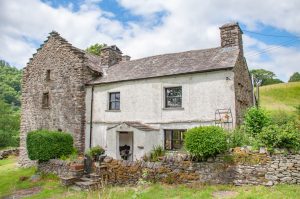 The House and tower each retain many original features including stone floors, vaulted basement and oak beams and floors.

The land, split across seven fields, is all pastureland, suitable for livestock grazing.

There is an extensive range of traditional buildings including cattle barns and cold store, pig sheds and general barns. The property’s main barn has recently been re-roofed and refloored.