True Student, the operator of Aura, a 999-room development opposite the Royal Hospital, sought permission for a number of amendments designed to improve the student experience, including a rooftop terrace for residents.

Other tweaks included a reorganised gymnasium on the lower ground floor and the introduction of the company’s festival zone, a new café on the ground floor that will be open to students and public alike, in addition to the private rooftop terrace and sky lounge on the 15th floor.

Aura Investors, a consortium of original investors in the scheme, acquired the development and are behind the revised strategy, focusing on reducing bedroom numbers in exchange for enhanced amenities.

Additional investment in public realm is also planned via an uplift to the Section 106 contribution of more than £1m.

Steve Nicholson, project architect from the Liverpool studio of Falconer Chester Hall, said: “The works will have a minimal impact on the building’s exterior, but will add significantly to what is already going to be a great place to live and study.

“The investors’ focus will position the development as the most attractive scheme in a well-served market, moving it beyond its locational advantages to one underpinned by strong, inherent appeal.”

Liverpool City Council planning officers recommended approval in the notes to the planning committee, and today’s (July 27) meeting duly gave the proposals the green light. Mr Nicholson said: “We are delighted with the positive outcome at the planning committee meeting today for Aura, Erskine Street, Liverpool. 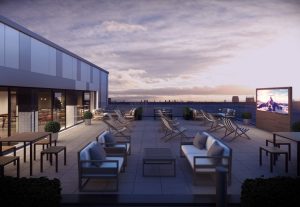 “The approval will allow the rooftop terrace to become a reality and to improve the communal spaces, enhancing the student experience.

“The committee commented that having a café that was open to the residents and the public was a great introduction due to the prominent location of the development.”

He added: “It was wonderful to see the changes unanimously approved by all committee members and this will allow the investors to secure the future of the scheme.”

Liverpool-based Vermont is the contractor. Phase one of the scheme, which incorporates three blocks, is due for completion in September, with the remaining two blocks to be completed by September 2022.

Luxury West Kirby apartments scheme gets the nod from planning