Regeneration company Urban Splash has completed deals on 40,000 sq ft of sales and lettings in its commercial portfolio this quarter and a total of 80,000 sq ft of deals since the turn of the year.

The commercial team has welcomed businesses into Urban Splash neighbourhoods and buildings including at Beehive Mill in Manchester. It said 5,000 sq ft has been let at the refurbished space which stands adjacent to the company’s New Islington neighbourhood, with new occupiers including Define Architecture, Pure Care Homes and Acre Lane Capital.

Another major deal in Manchester saw the entire City Court Trading Estate sold (26,945 sq ft) while in Merseyside, 8,000 sq ft of deals were completed at the Matchworks in South Liverpool to a range of businesses including Rehab 4 Performance. In the company’s South West portfolio, further deals were completed at the waterfront Royal William Yard neighbourhood in Plymouth.

Nicky Harries has helped oversee the deals in and said: “We continue to perform across our commercial portfolio, welcoming businesses into our buildings as they move back into vibrant communities post-lockdown. I’m delighted to have achieved more deals which continue a great year to date.”

Urban Splash has continued to support its tenants during the pandemic, establishing a taskforce to support customers as they adapted their workspace needs during lockdown. The result is a high level of retention and 80,000 sq ft of new deals since January, most of which have been agreed on flexible terms to allow for agility for businesses. Emily Jones is commercial director and said: “For years now we have worked in collaboration with our commercial customers, finding spaces that work for them, and lease terms that make change easy – be that outgrowing their space or needing to relocate geographically.

“That approach has been particularly pertinent during the pandemic, a time when businesses have only been able to plan for the short term. We’ve supported that and will continue to do so moving forward.” 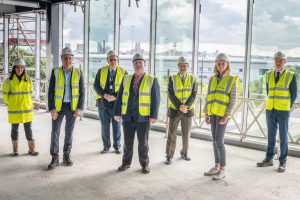 Hythe, Peel L&P’s Grade A business hub at Wirral Waters, has reached a special milestone in its construction.

Guests, including Wirral Council, the Liverpool City Region Combined Authority, and Merseyside Pension Fund, were invited to celebrate the ‘topping out’ of what will be the first speculative office development in Birkenhead for more than a decade.

The ceremony, which took place on Monday, August 2, marks reaching the highest point in the construction of the ‘next generation’ office building, part of the Four Bridges neighbourhood at Wirral Waters, which now stands at 15.3m.

Hythe was designed by architects, Glenn Howells to maximise on stunning panoramic views, showcasing both the Wirral Waters waterfront and Liverpool City skyline. It is being constructed by GMI Construction with completion expected in late 2021.

It offers more than 25,000 sq ft over three floors of high quality, flexible office space for entrepreneurs and local businesses. It has been designed to maximise the health and wellbeing of workers and sets high standards in sustainability with a BREEAM-Excellent rating which will place it in the top 10% of all buildings for its green credentials. Hythe has also been designed to accommodate the latest innovations in digital connectivity.

Hythe has been funded by Peel L&P, the Liverpool City Region Combined Authority and the Merseyside Pension Fund, brokered by CBRE Capital Advisors.

Metro Mayor of the Liverpool City Region, Steve Rotheram, said: “We’ve invested £3m in the Hythe site to ensure that we’re able to keep offering outstanding facilities and as a catalyst to attract new businesses and jobs to the area. It’s great to see that investment starting to physically take shape.”

Richard Mawdsley, director of development for Wirral Waters at Peel L&P, said: “It’s exciting to mark this important milestone for Hythe. With completion on track for late 2021, Wirral Waters is now firmly in delivery phase with many more key milestones to follow in the coming months.

“It’s been great to welcome all key partners to the top of the building this morning, not only to celebrate the progress of the build and the wider Four Bridges neighbourhood, but to be the first to enjoy the stunning views that span the Wirral Waters waterfront on one side, and the Liverpool city skyline on the other.” 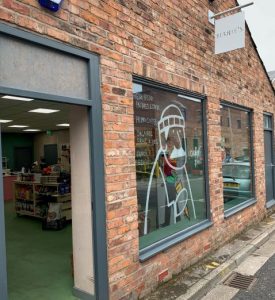 Fed up with twiddling their thumbs during the first lockdown of 2020 Will France, along with his partner Bethan Roberts, decided to do something they had always wanted to do and create the business.

Starting the venture online led to the October opening of a store in Heaton Moor – Bernie’s.

The entrepreneurs have now secured a second site in Altrincham just down from One Central in New Market Square in the centre of town. It has taken a 650 sq ft retail unit on 2 Central Way on a five-year lease.

Will France said: “It’s been a difficult time for all businesses, never mind a start-up. Weirdly the lockdowns added to the momentum of our business as people’s attentions were focused more on shopping local and cooking more at home. We’re massively proud of the last 12 months and being able to showcase the best indie suppliers and producers.”

He added: “The Altrincham shop has just opened, in an ideal location on the doorstep of Altrincham Market and we have brought some of our favourites with us including freshly baked Indian Curry Pies from Patel’s, which have become a phenomenon all of their own, along with bagels from State Fayre and sourdough from Triangle Bake House.”

Daniel Lee, managing director, Regional Property Solutions, who let the retail unit on behalf of a private pension, said: “Bernie’s was the perfect fit for this attractive unit, filling a niche in the market that complements the surrounding offerings.” 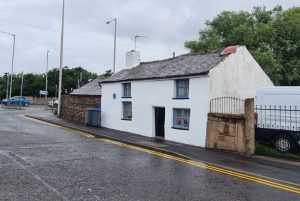 An 18th century, Grade II-listed cottage that has been earmarked by historians as being one of the few remaining early dwellings from the agricultural past of Blackpool’s Marton Moss area has been put up for auction.

Appearing in this month’s online sale by auction house Pugh, the unique one-bedroom property has been given a guide price of £55,000.

Pugh associate director, Eamonn Stones, said: “This property is an utterly charming and unique relic of what this area of Blackpool was like more than two centuries ago when it was mainly farmland.

“Opportunities to buy a piece of living history such as this one do not come along very often and this is an extraordinary property – a real window on a bygone age. The house has been well cared for and little altered over the years and it is well known to passers by as a remarkable and very old cottage. Needless to say we have had lots of interest from potential buyers interested in owning a unique piece of the town’s history.”

A blue plaque on the front of the cottage marks it out as part of the Blackpool Civic Trust heritage trail and states that the house now stands as ‘the representative of several similar late-18th century dwellings in the area’.

Since the onset of the coronavirus pandemic Pugh has sold lots totalling more than £60m at its auctions, held on the firm’s online platform.