The name of a striking 12-storey office block being built in New Bailey, Salford has been revealed.

Eden is the ambitious flagship development being developed by The English Cities Fund, a joint venture between urban regenerator Muse Developments, Legal & General and Homes England.

It will be built to the UK Green Building Council’s 2035-2050 Design for Performance standard and is set for completion in 2023.

The scheme is planned to be a 5.5-star NABARS UK scheme, the first of its kind in the UK.

Phil Marsden, project director at Muse Developments, said: “Eden is designed to be net zero carbon in operation, achieving the UKGBC interim energy intensity targets for operational energy – and this is where we believe Eden will have another advantage: some building projects in design stages which have suddenly changed focus to become more carbon-efficient have struggled to find the resource to go carbon-efficient in both constructing and operating those buildings. 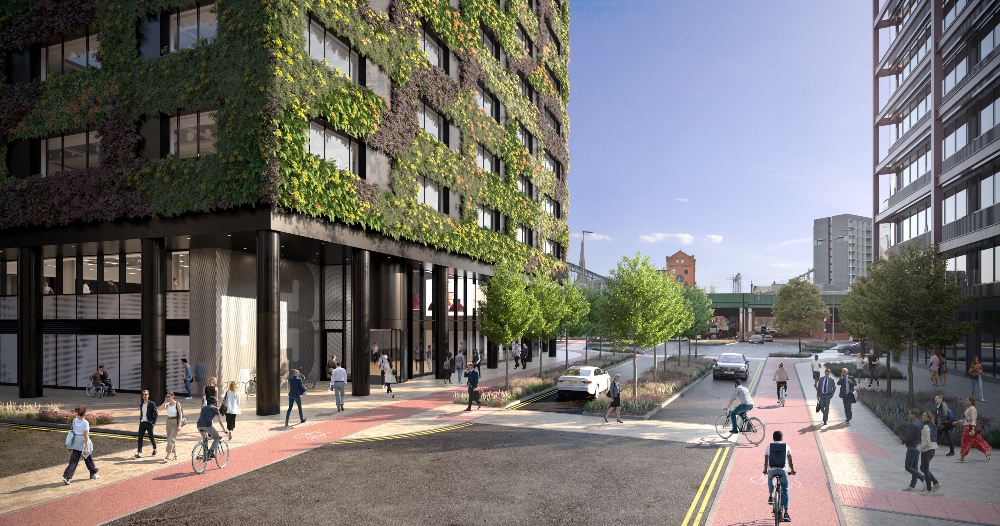 “It’s vital that these requirements are embedded into the brief from the very start.

“But this is not just about carbon – we have also thought hard about increasing biodiversity, and we have Europe’s biggest living wall – with the overwhelming majority of the non-glazed elements of the façade to be covered by 350,000 plants.

“The living wall provides real environmental benefits by removing toxins from the atmosphere, creating a significant increase in bio-diversity, providing habitat for birds, butterflies and pollinators, and also improves the thermal performance of the building.”

He added: “We are all contributors to change for the better, and we each have to start somewhere: Eden is as apt a name as any to describe both a start and a target for a more sustainable future.”

On the Beach founder to step down, as group sees return to profit