A call to suspend Greater Manchester’s road to a Clean Air Zone could be made over rising concerns that many in the region won’t be able to comply due to a shortage, and the affordability, of cleaner vehicles.

Greater Manchester’s clean air leaders will be asked to seek the Government’s permission to put the second phase of Clean Air Zone (CAZ) funding on hold and ask for an urgent and fundamental government review of the policy.

A report to the Greater Manchester Air Quality Administration Committee next Thursday (January 20) will set out evidence that global supply chain issues could increase the costs and reduce availability of cleaner vehicles.

More work is needed to understand whether this could create significant financial hardship for commercial vehicle users – already facing fuel and cost of living increases on top of the impact of the pandemic. What this means for Greater Manchester local authorities, and its impact on their ability to comply on time with a legal direction from government to tackle illegal levels of air pollution is also to be determined.

With nearly £100m of clean vehicle funding support due to open at the end of January, officials are recommending that councillors seek permission from the Secretary of State to pause these funds until government undertakes an urgent review of the supply chain issues, to understand what this could mean for the Greater Manchester Clean Air Plan.

This would seek to ensure that the right funding arrangements can be put in place quickly that better reflect the additional costs and vehicle availability problems that businesses are facing.

The report confirms that the first phase of the Clean Air Zone, due to launch in May 2022 – applying to buses, coaches, HGVs and taxi and private hire vehicles which are not registered in Greater Manchester – should go ahead, including the provision of funding support for HGVs and buses to upgrade.

In March 2020, the Government issued a legal direction requiring the 10 Greater Manchester Councils to address the clean air issue by introducing a Category C charging clean air zone – mainly commercial vehicles which do not meet set national standards for NO2 emissions.

The most polluting of these specific vehicle types will be charged from June 1, 2023 with the most polluting buses, HGVs and non-GM licenced taxis and private hire vehicles charged from May 30, 2022. The current Greater Manchester Clean Air Plan was prepared with government to meet the terms of this direction to achieve legal NO2 Limit Values in the shortest possible time and by 2024 at the latest.

Since funding support for vehicle upgrades were first identified, the global pandemic and associated international trade issues have compounded supply chain shortages in the commercial vehicle market, resulting in dramatic price increases of up to 60%, at a time when many are already dealing with hikes in fuel prices and the cost of living.

In late 2021, the Mayor of Greater Manchester and Greater Manchester leaders commissioned a report to look at concerns related to the supply of Clean Air Zone-compliant vehicles, which could affect the availability and cost of some vehicles and people’s ability to upgrade. 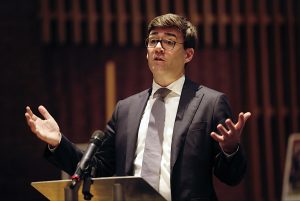 Mayor of Greater Manchester, Andy Burnham, said: “Everyone in Greater Manchester deserves to breathe clean air, but we have always said this cannot be at the expense of those who cannot afford to upgrade their vehicles to make them compliant in this timeframe. I want to reassure all those people who have been in touch that we are listening to you, and we will make sure your voices are heard.

“So, our committee will be asked to call on the Secretary of State to undertake an urgent and fundamental review of the policy for the second phase of the Clean Air Zone and to put on hold the next phase of funding until that review is done.

“We will work with Ministers and officials to share our findings, but these are matters out of our control and we can’t solve this in Greater Manchester – only government can.”

Cllr Andrew Western, leader of Trafford Council and the city region’s clean air lead, said: “We recognise that this is a problem for two reasons. The point of a Clean Air Zone is not to charge people for driving polluting vehicles, but to encourage them to upgrade to cleaner ones.

“If those vehicles are in short supply or are too costly for affected vehicle owners to buy, we face the real prospect of not meeting our legal duty and risk not cleaning up our air. Instead, it could place a huge financial burden on those already struggling after an incredibly challenging period brought about by the pandemic.

“We take our legal duties seriously, and with so much at stake, it can’t be right that we just ignore this and go ahead until we know more.”