Reinventing towns to serve their people once again

The reinventing of towns, post-pandemic, was brought into focus in a discussion about how two Northern locations are being reimagined.

Designer Wayne Hemingway, who founded the Red or Dead and Hemingway Design ventures, chaired the event, as part of the Invest North 2022 conference organised by TheBusinessDesk.com.

He opened the discussion by explaining what towns meant to him, saying: “My experience of towns started in the town I grew up in, Blackburn.

“The town centre was a place we went to for concerts. I always remember seeing David Bowie in King George’s Hall in Blackburn in 1972. Everything revolved around culture, but it wasn’t culture then, it was just going out.”

He lamented that society allowed town centres to become “temples of consumerism”, led by big brands: “Shop till you drop became the philosophy and landlords and councils were in cahoots.”

He said: “Blackburn is a ‘making town’ so we said ‘let’s give all the shops to makers’. It has been a big success.”

The town now stages its unique Festival of Making, a free festival that brings 60,000 visitors to Blackburn every year. Hemingway Design has also worked with King’s Cross in London, to reimagine the area. He added: “Town centres can be done differently.”

He welcomed the demise of some of the big retailers: “It’s good that big brands have gone, but a shame people lost their jobs. The public are driving this. A new generation are closing down, basically, shops that were s***.”

The discussion looked at two Northern locations that have experienced regeneration of different types, the Calderdale borough of West Yorkshire, and Morecambe in Lancashire.

Nicky Chance-Thompson is chief executive of The Piece Hall Trust in Halifax which has been reinvigorated since reopening in August 2017. She said: “Places like Piece Hall are part of our identity and DNA. They can give people a better way of working and reinvent towns.

“Calderdale is a very creative, distinctive, resilient and kind borough that will always rise to the occasion to support the community. Piece Hall has been part of our DNA since 1799.” 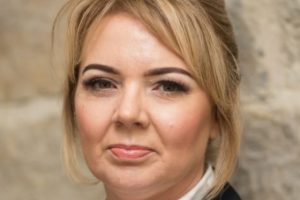 Since reopening in 2017 a European-style piazza has been created and it now supports 40 shops and businesses. Nicky said: “We needed to open up this amazing space to the rest of the world.”

She said since reopening Piece Hall has attracted 8.5 million people and it has added £2.5m to the local economy: “It’s amazing what you can do with these assets if you invest in them,” she added.

Pam Warhurst, who is behind Incredible Edible and chair of Todmorden Town Deal, initially began a revival of the town through her Incredible Edible venture which she said was aimed at “imagining a new local economy”.

It involved edible beds, growing food outside the local hospital, and the creation of ‘Pollination Street’ where food is grown in a bid to capture the imagination of what the market town might be.

She then became involved with Todmorden’s Town Deal which aims, among other things, to create a net zero town. There is a plan to create a piazza in the middle of the town.

Pam said: “What we’re doing in Todmorden feels owned by the people of Todmorden. We haven’t flown in people.”

David Harland, CEO of Cornwall’s Eden Project International, then followed, talking about his plan to create the £125m Eden Project North in Morecambe, birthplace of Wayne Hemingway, after receiving planning permission in January.

He said Cornwall’s Eden Project acted as a catalyst and now attracts one million visitors a year, boasts 80% local procurement, employs 363 staff and has contributed a £2.2bn economic impact.

The Morecambe scheme is set to attract 830,882 visitors a year and create 2,000 construction jobs.

Mr Harland said four years ago, when he floated the idea, people asked him, ‘why Morecambe?’ He explained: “We were struck from day one. Here was a place that existed to link the natural world with health and wellbeing.

“That’s why Morecambe existed. It was a place you went to to take the air and to see the beautiful environment that was out there. How do you take this place that has lost its way to create something that will drive people to view it as a 21st century seaside resort?”

He said, with the aim of opening in 2024, his plans will hopefully act as a change agent: “This can act as a beacon of levelling up and also as a beacon for skills and allow people in and around Morcambe to develop the skills they need.

“We are trying to create something that is of its place and talked about all around the world. The joy of this for me and the team is it is being built in right now and it is really happening. In Cornwall we had to retrofit.