One of the lowest carbon workspaces in the UK is to be built at Didsbury Technology Park in a £30m project by Manchester-based Bruntwood Works.

Named The Evo Building, in recognition of Bruntwood Works’ evolution towards net zero, it will be its first project to meet the LETI 2020 design targets for ‘upfront carbon’, RIBA’s 2025 targets for whole life carbon and the UKGBCs Paris Proof operational energy use targets.

All of the energy supplied to the site will either be generated on-site or from Bruntwood’s co-operative wind farm.

The aspiration for Ev0 was to create a truly low carbon commercial development, using parametric design principles to reduce the overall carbon footprint of the building.

Energy will be generated on-site at a number of locations, including two building facades, the building’s roof, and the car park, all acting as a series of mini power plants.

A smart building management system will ensure the space is managed effectively which will reduce running costs for customers. Bruntwood will provide strategic sustainability advice to Ev0 customers to help them meet their Paris Proof Target for their energy use.

The development will use low carbon materials such as mass timber and low carbon concrete in its construction. Timber has been used in the design because of its ability to capture and store carbon, ensuring it is not released back into the atmosphere until the end of its life.

Ahead of planning applications being submitted, a public consultation has been launched to provide an opportunity for the local community to give its feedback on proposals via a new online portal theev0building.co.uk.

Construction is due to begin in January 2023, with completion expected April 2024.

In 2018, Bruntwood, which comprises Bruntwood Works, Bruntwood SciTech and its joint ventures with Trafford Council and Bury Council, became the first commercial property developer to sign up to the World Green Building Council’s (WGBC) Net Zero Carbon Buildings Commitment, part of the WGBC Advancing Net Zero programme, establishing itself as a sustainability leader within the industry.

Bruntwood built on this at COP26 where it was one of the founding signatories to the WGBC’s revised Net Zero Carbon buildings commitment which mandates that organisations take into account the whole life carbon impacts of any new buildings and major redevelopments in their 2030 targets.

Ciara Keeling, CEO at Bruntwood Works, said: “Sustainability runs through the heart of everything we do at Bruntwood Works and the development of Ev0 will be a major milestone on our net zero journey. Now, more than ever, it’s important for businesses to be taking affirmative action to reduce their carbon footprint.

“That also means being fully transparent when it comes to presenting data and assessments, so it was important to us to create an authentically NZC workspace. We’re incredibly proud to be creating one of the lowest carbon workspaces in the UK.”

Ev0 will be set over 82,000 sq ft, across six floors, and sits between the Sir William Siemens House, Spire Hospital and Bruntwood Works’ Ohm Building at Didsbury Technology Park in Greater Manchester. 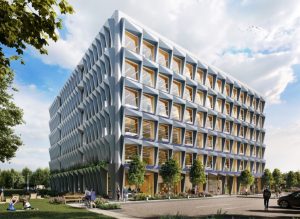 Manchester itself has strong net zero ambitions having set itself a target of 2038 to achieve carbon neutrality. As part of the extensive on-site facilities, Bruntwood Works plans to open an on-site café, which will also open at weekends for use by the wider community, customers and businesses.

Andrew Butterworth, commercial director at Bruntwood Works, said: “As a leader in its field, Ev0 will help those businesses using the workspace to achieve their own net zero carbon goals and serve as a blueprint and inspiration for others to follow in their sustainability plans.

“The Ev0 Building will provide a completely unique workspace offering to businesses in the North West, and, in fact, the UK, and the opportunity to work in the established Didsbury Technology Park community, which is already home to a number of leading brands including Siemens, Spire Healthcare and Manchester City Council.”

Ciara Keeling added: “We’re looking forward to hearing the thoughts of the local community and other stakeholders involved in the project and will be taking their feedback on board to help us ensure that, as one of the country’s lowest carbon buildings, it has a direct impact both nationally and regionally.”

The project will be supported by a number of strategic partners, including architect Sheppard Robson, MEP, structural and sustainability consultants Ramboll, and planning consultants Deloitte Real Estate. JLL and CBRE will act as agents for the building, bringing their extensive knowledge of the sustainability credentials customers are looking for.

Fintech provider signs Sciontec deal at The Spine as part of huge...