Lancaster City Council has lodged a bid for £50m of Levelling Up funding for Eden Project North in Morecambe.

The council hopes it will be one of the two £50m awards being given out in the second round of the Levelling Up Fund for projects with a culture and heritage investment theme.

These awards are for “flagship projects and must be in line with the fund’s focus on highly visible interventions that boost local pride in place”.

The bid builds on the detailed work done by Eden on its initial business case for Eden Project North submitted to the Government in September 2020, and sets out the economic, environmental, social, educational and cultural benefits that Eden Project North will bring to Morecambe and the surrounding region.

Around 300 high quality green jobs will be directly created by Eden Project North, plus more than 1,000 additional new jobs supported in the region.

Annual visitor numbers are projected to be 740,000 and additional revenue brought into local businesses due to Eden Project North is set to exceed the £50m government investment within months of the project opening.

A government contribution of £50m would form half of the projected £100m cost of building Eden Project North, with the remainder of the funds coming from private and philanthropic sources.

“Simply put, it will transform the local economy and have a transformative effect, not just on Morecambe but the whole region. I have to thank all the Eden partners for the tireless energy and commitment they have shown as we put together this comprehensive bid.”

Rob Chatwin, group CEO of the Eden Project, said: “This moment is the culmination of years of hard work by David Harland and the team developing the ideas for Eden Project North alongside our partners in the North West. Morecambe Bay is a uniquely beautiful location and we have designed Eden Project North to complement and enhance that.”

County Councillor Phillippa Williamson, leader of Lancashire County Council, said: “Eden Project North is incredibly exciting and will deliver major economic, social, and cultural benefits for Morecambe, Lancashire, and the North West Region. The support of the community for the project and the commitment of everyone involved in bringing together the proposals has been fantastic.” 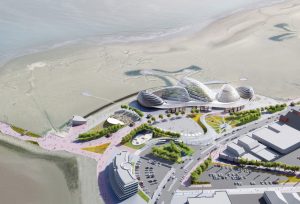 Plans for the new scheme

Prof Dame Sue Black of Lancaster University said: “Eden Project North will be transformative. The economic impact of the Eden Project on Cornwall is widely recognised, but what are often overlooked are the wider environmental, cultural and social benefits the project has brought. These make the Eden Project North proposal ‘shovel ready’ for funding through the levelling up process.”

Debbie Francis, chair of the Lancashire Enterprise Partnership, which contributed £1.2m from its Growth Deal Programme to develop the project, said: “Eden Project North will create significant employment opportunities, both directly and indirectly within the wider supply chain, as well as enhancing our already world class environmental research expertise.”

David Morris, MP for Morecambe and Lunesdale, said: “Eden Project North is the flagship opportunity facing our community for a generation. This bid marks five years of hard work by Eden, their partners and me, and it is a testament to the team how much support this project has in the community.”

If successful, it would develop a range of complementary public transport, walking and cycling projects aimed at significantly improving travel opportunities for people across East Lancashire, making them safer and greener.

The three themes are:

County Councillor Aidy Riggott, cabinet member for economic development and growth, said: “A huge amount of work has been undertaken to identify the areas that would benefit the most from the Levelling Up Fund. This includes looking at levels of employment, health, physical activity, air quality, car ownership, road accidents, walking and cycling, and bus and rail services.”

MusicMagpie shares plummet by 70% as it warns on profits