Further to the recent sale of Emperor Court, Legat Owen has announced the sale of Electra House at Crewe Business Park. PAGG Properties has sold this multi-occupied building of 20,000 sq ft to Bond Estates, the investment arm of H.W Coates, for an undisclosed sum.

“Its occupiers include Medtrade Products and Alan Boyd Consultants as well as several other well established and successful companies. It is also home to Corspace which offers flexible hot desks, dedicated desks and small offices tailored to modern working practices.

“We would like to thank Andy Butler and the Legat Owen team for negotiating the sale and for their dedication over the many years of managing the property on his behalf.”

Richard Perry, managing director at Bond Estates, said: “Crewe Business Park presents a thriving commercial estate in an excellent location and we are delighted to add Electra House to our growing property portfolio.”

Optical style consultancy, The Eyewear Stylist, has signed a three-year lease at MediaCity.

The independent business, founded by qualified Dispensing Optician and trained personal stylist Dan Scott, provides expert advice not only on what frames will suit the wearer’s face but enhance their look and style.

The decision to base the business in MediaCity’s Arrive workspace in White Tower follows a successful first year at the waterfront creative hub, with Scott having established a loyal and growing customer base.

He said: “I explored a number of city centre and suburban locations as a base before the business’s launch in 2021, but none rivalled MediaCity. The sense of community and support for start-up businesses is incredible and has been invaluable in this first year of business – I’m delighted to sign a three-year lease.”

Rebekah Lloyd Beere, Arrive operations manager, said: “Dan’s creative energy and passion for what he does is inspiring and it’s been fantastic to provide a platform for The Eyewear Stylist to build his profile among the Arrive community based here at MediaCity and beyond.” 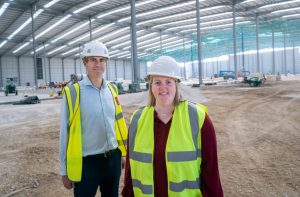 A major development at one of Oldham’s key regeneration sites is on track for completion next month.

It is the largest employment plot on the Chadderton regeneration scheme and, when complete, could create around 450 jobs.

She said: “The new unit is very impressive – not only in terms of its size but also the quality design which is maximising natural light and achieving high standards of sustainability. We look forward to welcoming a new occupier to this fantastic development in the near future.”

Ben Ward, said: “This is an exciting project for us, we are really pleased with the progress on site and look forward to handing the project over to our funding partner Aver Properties in the coming weeks. We understand there is strong demand in the unit from occupational tenants which underpins the strength of the location and quality of the build.

“The building will achieve the high sustainability targets we set at the outset by being awards BREEAM ‘excellent’ accreditation and EPC ‘A’ rating. This unit will be a state of the art facility making for a truly modern working environment which is achieved with enhanced daylight measures and quality of materials.”

Situated in a prime location, near the M62 and M60 motorways and only two miles from Oldham town centre, Broadway Green is being developed in partnership with Oldham Council, Seddon and Grasscroft Property.

It is set to deliver more than 600,000 sq ft of employment space, creating up to 2,000 jobs and around 500 homes – 234 homes have already been built at Broadway Green and Countryside Properties is currently on site delivering the next phase of 160 homes, including affordable homes.

In addition to new homes and employment space, the scheme will also include significant green open space in the form of a new linear park. 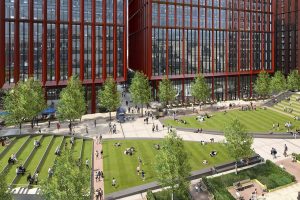 Kalibrate, the data analytics company, officially opened its new office on August 9, in the heart of Manchester’s innovation district. The move to Circle Square boasts an opportunity to innovate, network and support Manchester’s thriving technology scene.

It says it also promotes its rapid growth beyond traditional fuel retail software and retains the agile working culture that has been adopted over the past couple of years.

Circle Square is part of Bruntwood SciTech’s UK-wide network of innovation districts, and Kalibrate will benefit from the opportunity to collaborate as part of a specialist community of digital tech-based businesses from across the country. The new office features brand new facilities and will continue the business’s transformation into a leading retail and data analytics organisation.

Kalibrate is an established Manchester-based business with its roots in the University of Manchester Institute of Science and Technology (UMIST). The business has expanded into new markets beyond fuel over the past few years and transformed into a global retail data company with further offices throughout the US and Asia.

Chief executive, Oliver Shaw, said: “This is not just any office, this is a purpose-built collaboration space to support our work from anywhere culture. On top of that, we have put ourselves in the centre of Manchester’s tech ecosystem and for Kalibrate at least, close to the University of Manchester and Oxford Road. Making the move to Circle Square gives Kalibrate an exciting base to further grow our future ambitions in retail analytics.” 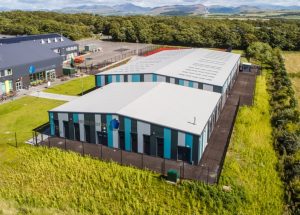 Commissioned through the Department for Education’s (DfE) low value framework, the facilities include new technical and engineering workshops, meeting rooms, an SEN resource base, replacement sports pitch and a new changing pavilion.

Designed by architects Cassidy + Ashton and civil and structural engineers Curtins, the works also include the design and construction of a new pedestrian crossing to connect the College’s two primary sites.

James Eager, director for Eric Wright Construction, said: “It is great to have delivered these superb new facilities on time, allowing the college and its staff to obtain the necessary training in advance of the new autumn term. We have enjoyed a long relationship with the college, having originally built the facility back in 2013, and it is good to see continued investment and improvement in such an important local education establishment.”

Energy Coast UTC principal, Cherry Tingle, said: “Young people in West Cumbria will now have access to a truly stunning range of engineering, civil engineering and digital and cyber facilities, as well as a new sports pitch and changing rooms.” 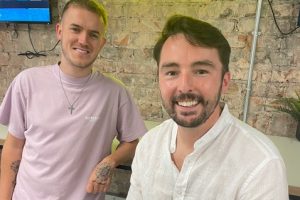 Fairmont Recruitment moved into 2,100 sq ft of space in 53-55 Mosley Street, which is three times bigger than its previous base in Knutsford.

The tech recruitment specialist has signed a five-year lease on the office, which CEO Jack Donohue predicted would be the “springboard” for future growth.

Fairmont was founded in 2018 and Donohue described the office move as the “most significant step” in the company’s history to date.

He said: “Our previous office in Booths Park, Knutsford had space for 10 employees so we were full. We’re not a reactive business, we’re looking forward to the future. We can get between 24-26 people in the new space, so we’re future-proofing our growth.

“Next for us won’t be about new offices in Manchester but different locations, possibly in London and internationally.”

Donohue added: “We needed a central location, with first class public transport, that was accessible to future and current talent.

“We do a four-day working week at Fairmont so we want people to be in the office for those four days. To ask people to work from the office means you have to provide a space where they want to work. That’s why we’ve gone for a bit of a showstopper and invested more money than we would have done if we’d gone for a standard office.”

The move comes at a time of record growth for Fairmont, which employs 11 staff and is on track to double its turnover to £3.5m in the current financial year.