Plans for the major regeneration of the site of Coventry’s world-famous Daimler car factory have taken a significant step forward.

Property and development company The Wigley Group has submitted an outline planning application to Coventry City Council for the mixed-use development on Sandy Lane in the Radford area of the city.

The seven-acre brownfield site sits on the side of the Coventry Canal and is currently a business park and industrial estate. It is designated for housing by Coventry City Council.

Central to the proposals is the integration of the site — to be known as Daimler Wharf — with the existing community by reconnecting the area to Coventry Canal and creating a large public common.

The outline planning application includes up to 480 homes. 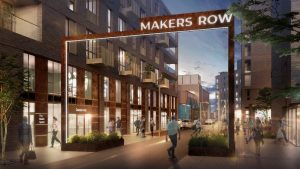 At the heart of the development will be a linear park and two public squares.

Direct pedestrian and cycle links through the new community to Coventry Canal will also improve the pedestrian corridor into the city centre.

There will be electric car charging points, and an electric bike and scooter station, as well as other flexible commercial space.

The first phase of the Daimler Wharf scheme has already been completed, with the refurbishment of the Daimler Powerhouse building — the only part of the car factory to survive Second World War bombing — into a creative hub.

The Daimler Powerhouse Creation Centre is run by Imagineer Productions and home to four other resident creative arts companies: Highly Sprung, Media Mania, Open Theatre and Talking Birds.
Mike Vining, land and development director at The Wigley Group, said: “Our vision has always been to build on the site’s great heritage. We have already started to deliver on that by investing in the only remaining part of the Daimler car factory to once again make this important heritage asset a real focal point as a state-of-the-art creative hub.

“The wider plans that will build on phase one are for a new and vibrant neighbourhood that addresses local housing need and offers visual improvements alongside environmental benefits that will contribute to the city’s aspirations for a cleaner and greener future. 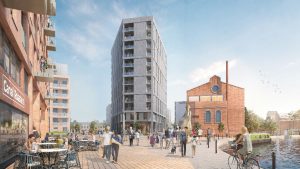 “Over the past three years we have consulted widely with local stakeholders and the surrounding community. The feedback has been very positive and has helped shape the scheme which we are now delighted to be presenting to Coventry City Council.”

James Davies, chief executive at The Wigley Group, said: “When we acquired this site in 2006, we saw straight away the potential that it had for redevelopment and the contribution that a high-quality northern quarter could make to the wider regeneration of this part of the city and how it will link through the Canal Basin the heart of the Coventry.

“This site has been designated for housing by Coventry City Council for a number of years and this scheme presents the opportunity to now bring this site forward to realise its full potential in helping to address local housing needs, but also to reinvigorate the area through the creation of a northern gateway to the city centre that celebrates Coventry’s industrial past and cultural future.”