Planning submitted for 154 bed hotel at Heart of the City

A planning application for the latest round of Heart of the City II proposals has been submitted today, which if approved would see a landmark Radisson Blu hotel open on Pinstone Street.

Designed to enhance Sheffield’s offer as a business and leisure destination, it is anticipated that the addition of a stylish new hotel will help to attract further investment to the city centre, with plans first unveiled in June. The plans form the most recent phase of the Heart of the City II redevelopment programme, which is backed by Sheffield City Council, with Queensberry as its strategic development partner a scheme and is expected to drive Sheffield’s post-coronavirus recovery.

The 154-bedroom hotel would be housed behind the Victorian façades of Palatine Chambers and City Mews on Pinstone Street, complete with a sympathetic roof extension. Most of the hotel rooms would be housed in a separate complementary building and offer secondary lobby access from Burgess Street. 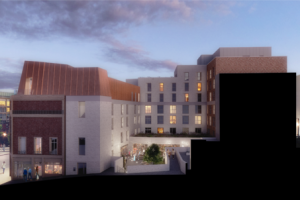 Included within the development would be high-quality conferencing facilities, retail and food and beverage units on the ground floor, and the eagerly anticipated rooftop terrace and bar — bringing a new dynamic to the city centre’s social scene.

Sitting between the two core hotel blocks will be a courtyard designed as an enticing social space with seats and atmospheric lighting.

Andrew Davison, project director at Queensberry, said, “After many months of hard work, we’re pleased that an application for the Block A proposals has now been submitted. A huge amount of effort has gone into developing a fresh and contemporary design for the brand-new hotel, while also paying homage to Sheffield’s unique character.

“These plans will breathe fresh life into Pinstone Street, and we can’t wait to welcome international hotel brand Radisson Blu to Sheffield.”

Councillor Mazher Iqbal, cabinet member for business and investment at Sheffield City Council, commented, “We’re delighted to announce that an application has now been submitted for our plans to add a four star+ hotel and rooftop bar to Sheffield city centre. This step marks yet another significant milestone as we continue our progress towards transforming Sheffield’s heart of the city.

“We’ve reached this point in the process after a recent public consultation — throughout which we received a great deal of valuable feedback from local people and stakeholder groups.

“The comments and perspectives shared during the consultation have helped us to successfully shape our proposals and I would like to personally thank everyone who has participated in the process.”

A point frequently raised by members of the public related to the retention and reuse of the frieze previously located on Barkers Pool House. As expressed by local people, public art murals such as William Mitchell’s frieze contribute significantly to Sheffield’s sense of identity and place.

In response to public consultation which raised the importance of public art murals such as William Mitchell’s frieze who it is said “contributes significantly to Sheffield’s sense of identity and place”,
the Council has safely removed it and placed it in secure storage, with a commitment to reinstate the artwork within a public space in the Heart of the City II.

The regeneration project which builds on the success of Heart of City at the start of the millennium has seen plans reveal how it intends to create a “cultural heart” of the city and also seen global law firm, CMS, sign up as the anchor tenant of the development.