One of Europe’s biggest indoor children’s play centres is set to open in Yorkshire in 2022, bringing with it several million pounds of investment and the prospect of dozens of new jobs.

Set in the grounds of the 2,000-acre Stockeld Park Estate, close to Wetherby, the Playhive at Stockeld Park will feature a series of themed and interconnected adventure zones set in a doughnut-shaped building with a 33-foot tower at its centre.

The new building will have an internal area of over 20,000 sq ft. The £3.5m structure will have a total diameter of almost 130 ft, with the central circle spanning some 65 ft.

The Playhive is the brainchild of Peter and Susie Grant, who own and run Stockeld Park, and who have designed the new indoor spectacle from concept.

Peter Grant said: “The Playhive is a passion project. We didn’t want the usual soft play scene, but one that truly inspires imaginations.

“There will be some really spectacular features and we’ll be announcing these on the run up to the opening of the Playhive.”

The Grants took out a loan to build the Playhive, which will create and safeguard 50 jobs. 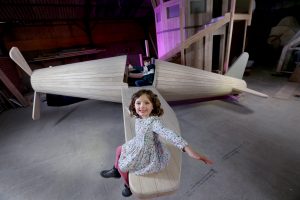 It has capacity for 2,000 visitors per day and is expected to bring significant additional revenues to the area, as well as supporting local suppliers.

Peter Grant added: “During lockdown, we had to close Stockeld Park for significant parts of the year, and when we were allowed to open, Covid restrictions hugely reduced our capacity.

“The natural reaction would have been to reduce spending, and certainly not take on such a major capital project, but we actually had the idea for The Playhive long before Covid hit.

“The lockdown has just reconfirmed our commitment to the project. Now more than ever, our tourism sector needs to come back fighting, and after the isolation and anxieties of the last year, families desperately need to get away and have some fun.”

The tourism business at Stockeld Park was started by the Grants in 2006 and pioneered the use of illuminations and tableaux presented in the Estate forests, to attract visitors at Christmas time.

The initiative grew into the Christmas Adventure, which now features winter illuminations in its Enchanted Forest, an eight-foot high Yew tree maze, a 1.2km Nordic Ski Trail and ice-rink, which in normal times attracts over 100,000 visitors every Christmas.

200-home scheme to be built on former training centre site

Home for adults with complex needs to create another 100 jobs