Spencer Group has been selected by ABP to deliver Border Control Posts (BCPs) at the ports of Hull and Immingham.

The Government had directed all BCPs, which will be used to carry out checks on plants, plant products and animal products imported from the EU, must be operational by July 1 as part of its staggered approach to introducing new border control checks following Brexit. However, this date has since been relaxed.

A dedicated project team was mobilised immediately after Spencer Group was awarded the contract on December 28 and has been working every day since in order to deliver the project on time. 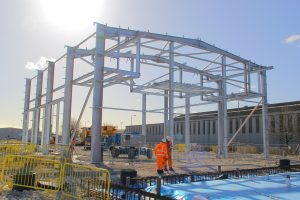 The team has now hit a major milestone, with the foundations having been completed ahead of schedule at both sites.

Steel structures are currently being erected and a modular building for border control officers at Immingham is already in place.

“We’ve maintained our progress and momentum and achieved the first significant milestone, which was the completion of the foundations, ahead of programme.

“It has been an incredible effort by all involved and has only been possible by such close and effective collaboration between ourselves and ABP.

“We are working together as one project team. There’s still a lot to do, but it’s going very well.”