City of York Council has confirmed the restoration of the Guildhall has been completed.

It means some of York’s historic buildings are now ready to support local businesses and drive economic growth.

Planning and Listed Building consent for the scheme was secured in 2017 by the council, led by architects Burrell Foley Fischer.

Restoration and redevelopment began in September 2019, with the council appointed construction contractor, VINCI Construction UK, carrying out an extensive programme of works to refurbish the buildings to create a first-class business venue.

Funding for the £21.7m project was provided by City of York Council, York and North Yorkshire LEP and West Yorkshire Combined Authority through HMG Growth Deal contributions and the Getting Building Fund. 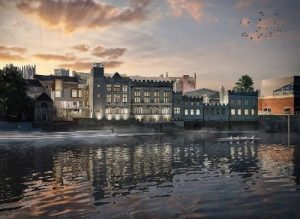 Following the restoration, the buildings will be leased to York Science Park (YSPL), a subsidiary of the University of York, helping to support local entrepreneurs and start-ups looking to grow.

The Guildhall is a collection of Grade I, II* and II listed buildings built around the 15th century hall and riverside meeting room.

Before the project, the complex had only seen reactive repairs and maintenance works since extensive rebuilding was carried out following bombing raids in 1942.

The restored Guildhall will offer:

Councillor Keith Aspden, leader of City of York Council, said: “The Guildhall is one of York’s and the region’s most historically significant buildings and I am pleased to see this great asset restored for the city.

“The investment in the Guildhall means the complex will once again play an important role in the city’s future for years to come, with excellent facilities for businesses and local residents to benefit from.”

Cllr Nigel Ayre, executive member for finance and performance at City of York Council, said: “The council has made a major contribution to secure the long-term future of the Guildhall via this restoration project and we are proud to be custodians of such a nationally important building in the city.

“Crucially, we have been able to preserve the historic character of the building, whilst also redeveloping it for business, social and civic uses.

“The Guildhall will be accessible for local residents for the first time in many years, with tours and open days taking place next month, offering an opportunity for people to take a look inside.”

Chris Winspear, regional director at VINCI, added: “It has been an honour to take on this once-in-a-generation project and the resulting transformation is testament to the successful partnership working between City of York Council, the design team, ourselves and our supply chain.

“There have been some extraordinary engineering and logistical challenges to overcome and our team are very proud in what they have accomplished.

“It’s been a delight returning the Guildhall to its former glory, whilst repurposing it for 21st century use.”